G7 a chance to renew US-UK ties, but it won’t be all smiles and friendly elbow bumps

Boris Johnson has scored an early diplomatic win with the UK becoming the first foreign destination for Joe Biden since he became US president.

But it is more thanks to good timing than the special relationship – a term the prime minister reportedly doesn’t like anyway because he thinks it sounds weak and needy.

As host of the Group of Seven (G7) industrialised nations this year, Britain is providing the platform for world powers to gather for the first time in person since the COVID-19 pandemic swept across the globe.

It gives Mr Johnson a prime opportunity, before group diplomacy kicks off on Friday, to secure some one-on-one time with Mr Biden and to renew UK-US ties after four turbulent and unpredictable years under Donald Trump.

Yet, despite all the values the two countries share, their deep security ties and long-running friendship, this won’t be all smiles and friendly elbow bumps.

But he will unlikely have the same chemistry with the British prime minister as his predecessor did.

Mr Johnson, with his blonde hair and reputation of a disruptor of the status quo – embodied by Brexit – was sometimes dubbed ‘mini Trump’ – a label that he will be keen to shake as he builds his friendship with the new administration.

This US president, unlike Mr Trump, is also no fan of the UK’s decision to leave the European Union.

He will feel no particular urge to put Britain at the front of the cue for any trade deal – a prospect dangled by his predecessor but never sealed.

Then there is the significant issue of the impact on Northern Ireland of the UK’s Brexit deal.

Mr Biden has been clear he will not accept any action by Britain or the EU that further endangers the Good Friday agreement, which is already under strain.

In addition, what will the US leader make of the UK government’s decision to shelve “temporarily” a promise to meet a UN target of spending 0.7% of national income on foreign aid at a time when the world’s poorest need help from the richest more than ever?

A £4bn cut in overseas aid means the UK is the only G7 nation reducing the amount it spend on helping developing nations.

That said, the UK and the US have always had their differences.

It is their common goals and values that makes this bilateral relationship so vital to both sides and the rest of the world’s democracies.

At a time of a rising authoritarian China and with threats from Russia still acute, Mr Johnson and Mr Biden will ultimately want to strike a united front, knowing that all democracies are stronger when they work together. 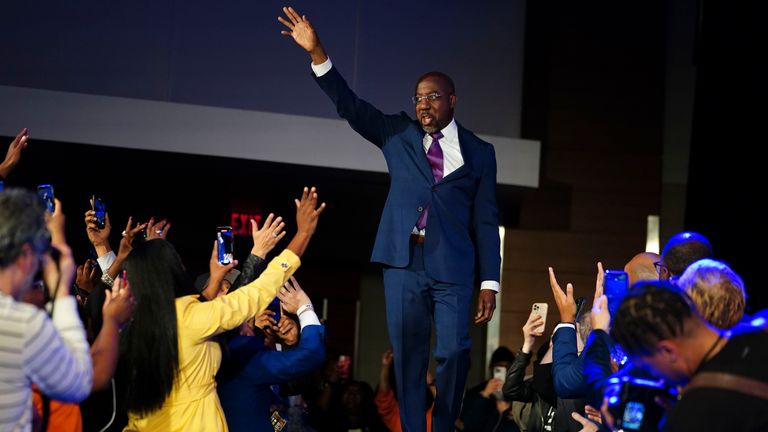 Democrat Raphael Warnock has been re-elected to the US Senate in a crucial win for President Joe Biden, NBC News has projected.

His expected victory gives Democrats an outright majority in the Senate after two years under a 50-50 divide, with Vice President Kamala Harris casting tie-breaking votes.

A run-off election was triggered because neither candidate had won an outright majority during the midterm elections last month.

In his victory speech, Mr Warnock told supporters: “After a hard-fought campaign – or should I say campaigns – it is my honour to utter the four most powerful words ever spoken in a democracy: The people have spoken.”

Mr Biden called him to offer his congratulations.

He tweeted: “Tonight Georgia voters stood up for our democracy, rejected Ultra MAGAism, and most importantly: sent a good man back to the Senate. Here’s to six more years.”

Mr Walker, an American football legend in the 1980s, was unable to overcome a bevy of damaging allegations, including claims he paid for two former girlfriends’ abortions.

A multimillionaire businessman, he inflated his philanthropic activities and business achievements, including claiming his company employed hundreds of people and grossed tens of millions of dollars in sales annually, even though records indicate he had eight employees and averaged about $1.5m (£1.2m) a year.

He has suggested he has worked as a law enforcement officer and was a college (university) graduate, though he has done neither.

His Senate run was endorsed by former president Donald Trump.

Having followed Herschel Walker on the campaign trail in Georgia, it is difficult to believe this race ever went to a runoff.

The former NFL star has consistently struggled to convey a coherent message, with badly delivered speeches in contrast with his opponent, Reverend Raphael Warnock, a preacher by trade who commands an audience.

Walker was handpicked as a nominee by the former president, Donald Trump, but his reputation was smashed to smithereens during the course of the campaign.

He ran on an anti-abortion pledge, yet two women emerged to allege he paid for them to have an abortion after they became pregnant by him (claims he denies). He also condemned absentee fathers, particularly in black households, but later acknowledged he has a son he never sees.

But his defeat is not only important for Democrats because of the rejection of his personal integrity – or lack thereof – and the “Make America Great Again” values he espoused.

It also means that – for the first time in Joe Biden’s presidency – his party has an outright majority in the senate.

The new 51-49 split means Democrats can speed up judicial nominees and control committees in the Senate. But it also avoids a situation where one senator – in the past two years it has been Joe Manchin or Kyrsten Sinema – can wield their swing vote as a weapon.

Perhaps most significantly, though, it is yet another signal that America is moving away from Mr Trump as a political force.

On the campaign, Mr Warnock, the state’s first black senator, promoted his Senate accomplishments, touting a provision he sponsored to cap insulin costs for low income patients, and deals on infrastructure and maternal healthcare.

Although a Democrat, Mr Warnock had been attempting to distance himself from Mr Biden, whose approval ratings have lagged as inflation in the US remains high.

The Democrats’ new outright majority in the Senate does not mean an end to divided government, as the Republicans narrowly flipped House control in recent midterms, but it does mean they will now hold control of powerful committees. Donald Trump’s real estate company has been found guilty of running a criminal scheme to defraud tax authorities for 15 years.

The scheme operated by The Trump Organization included avoiding paying personal income taxes on perks such as rent-free apartments and luxury cars.

“The smorgasbord of benefits is designed to keep its top executives happy and loyal,” prosecutor Joshua Steinglass told
jurors during his closing argument on Friday.

The firm, which operates hotels, golf courses and other real estate around the world had pleaded not guilty.

The former US president was not personally charged in the case.

The Trump Organization had argued that chief financial officer Allen Weisselberg, 75, ran the scheme to benefit himself.

He is on paid leave and testified that he received more than $1m in salary and bonus payments this year.

The firm will be sentenced on 13 January. Trump Organization lawyer Alan Futerfas told reporters the company would appeal.

While the firm now faces paying a fine, it is considered unlikely that it would cause serious damage to a company of its size. The group comprises about 500 business entities.

However, the conviction could make lenders and partners think twice.

And Donald Trump himself is being investigated by the US Department of Justice over his handling of sensitive government documents after he left office in January 2021 – and attempts to overturn the November 2020 election, which he lost to Joe Biden.

Republican leader snubbed as police who defended US Capitol honoured The Republicans’ leader in the Senate has been snubbed by the family of a police officer who died following the US Capitol riots on 6 January 2021.

It happened during a ceremony held for officers who defended the Washington DC landmark against Donald Trump supporters.

The officers have been honoured with Congressional gold medals for “courageously answering the call to defend our democracy in one of the nation’s darkest hours”, House Speaker Nancy Pelosi said.

But when the family of Brian Sicknick, who died after suffering two strokes on 7 January, passed Mr McConnell in a line-up, they refused to shake his outstretched hand.

In contrast, the Democrats’ leader in the Senate, Chuck Schumer, received a kiss from Gladys Sicknick, the late officer’s mother.

Recognising the hundreds of officers who were at the Capitol on 6 January, the medals will be placed in four locations: US Capitol Police headquarters, the Metropolitan Police Department, the Capitol and the Smithsonian Institution.

President Joe Biden said one was being placed at the Smithsonian museum “so all visitors can understand what happened that day”.

He told the officers: “It was your blood, your sweat and your tears that marked these grounds.”

US Capitol Police Chief Thomas Manger called it a “day unlike any other in our nation’s history – and for us”.

He added: “It was a day defined by chaos, courage and tragic loss.”