IndyCar rookie Jimmie Johnson is hopeful of testing in August on the oval at Homestead-Miami Speedway as part of a path toward running in next year’s Indianapolis 500.

Johnson, a seven-time NASCAR champion, jumped this season to IndyCar and has competed in seven races for team owner Chip Ganassi. He’s set to race again next weekend at Nashville. Johnson hasn’t finished better than 19th this season.

Johnson, 45, only wanted to drive road and street courses this year but has the desire to drive at Indy next season. Johnson would have to complete the Rookie Orientation Program later this year required to race on the Indy oval.

Johnson texted Grosjean on Tuesday and asked for tips on handling the oval course.

“I’m trying to find my comfort with the ovals,” Johnson said. “I think he’s in a similar place. We’ve both been chatting over the course of the year about ovals. Really, about the experience altogether. I get more and more comfortable with ovals. Hopefully, the test, when it happens in late August, will go well and I’ll continue to work closer toward the Indy 500 or ovals in general.”

Johnson’s seven NASCAR championships are tied with Hall of Famers Richard Petty and Dale Earnhardt. Johnson said there should be carryover from his NASCAR career in Indianapolis to when he attempts the open wheel run at the Brickyard.

Johnson will miss only the Aug. 21 race at the track outside St. Louis the rest of the IndyCar season. That track is a mile oval. Johnson, who worked the Indy 500 this year as an analyst for NBC, shares the No 48 this season with Tony Kanaan. Kanaan will drive the ovals again in 2022.

Used to the more grueling NASCAR schedule, Johnson is slated for 12 road and street course races and he skipped the four oval races.

“I’ve really wanted to slow down this year and try something new,” Johnson said. “Both of those things are definitely happening.” 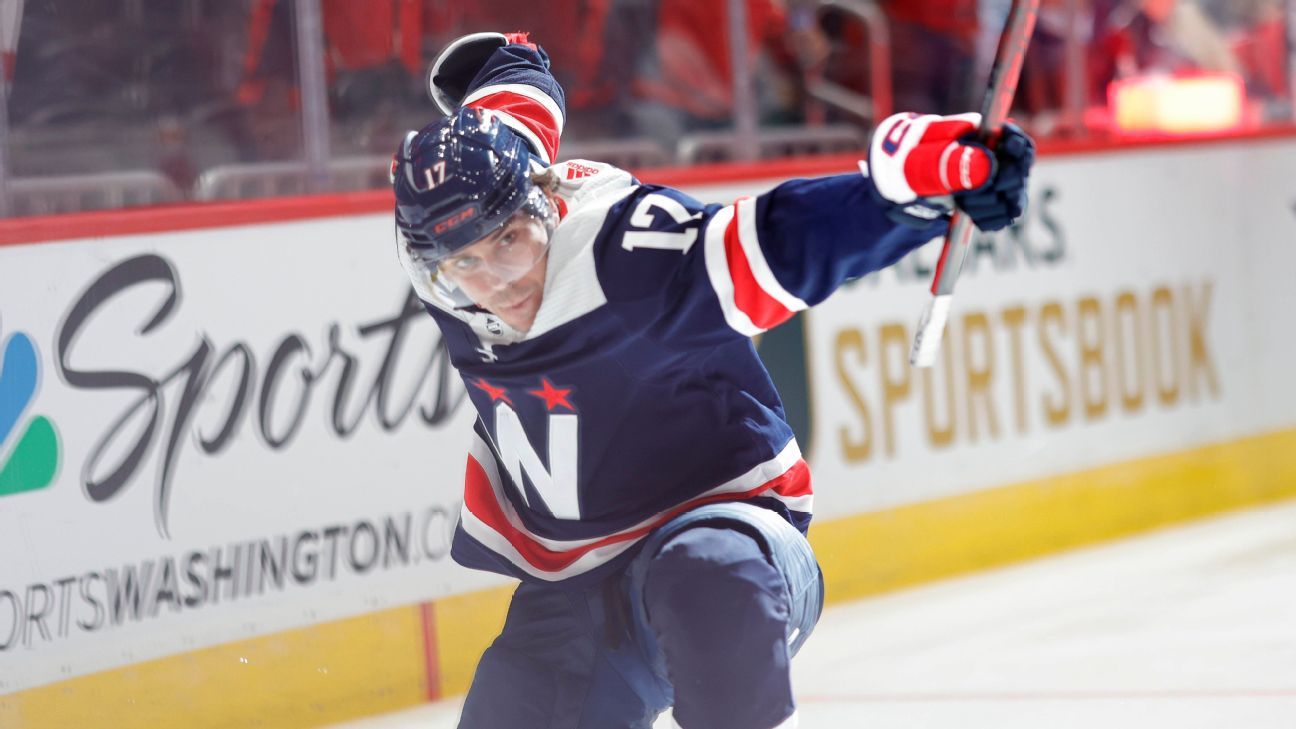 The team announced the contract Friday during NHL All-Star Weekend, which is taking place in south Florida — where the draft was held in 2015 when Strome was picked third overall.

Strome will count $5 million against the salary cap through the 2027-28 season. He was set to be a restricted free agent this summer.

“Dylan is an intelligent and skilled center and has been a great addition to our organization,” general manager Brian MacLellan said. “We are pleased to sign him to a long-term contract. We feel his skill set is a great fit for our team as he enters the prime years of his career at an important position.”

Strome is getting a raise from the $3.5 million deal he signed with the Capitals after the Chicago Blackhawks opted not to tender him a qualifying offer and made him a free agent. Strome has 11 goals and 25 assists in 36 games this season and ranks third on Washington’s roster with 14 power-play points.

The Mississauga, Ontario, native who played his junior hockey alongside Connor McDavid with the Erie Otters has 206 points in 325 regular-season NHL games with the Arizona Coyotes, Blackhawks and Capitals.

Larkin hopes to stay in Detroit as talks continue 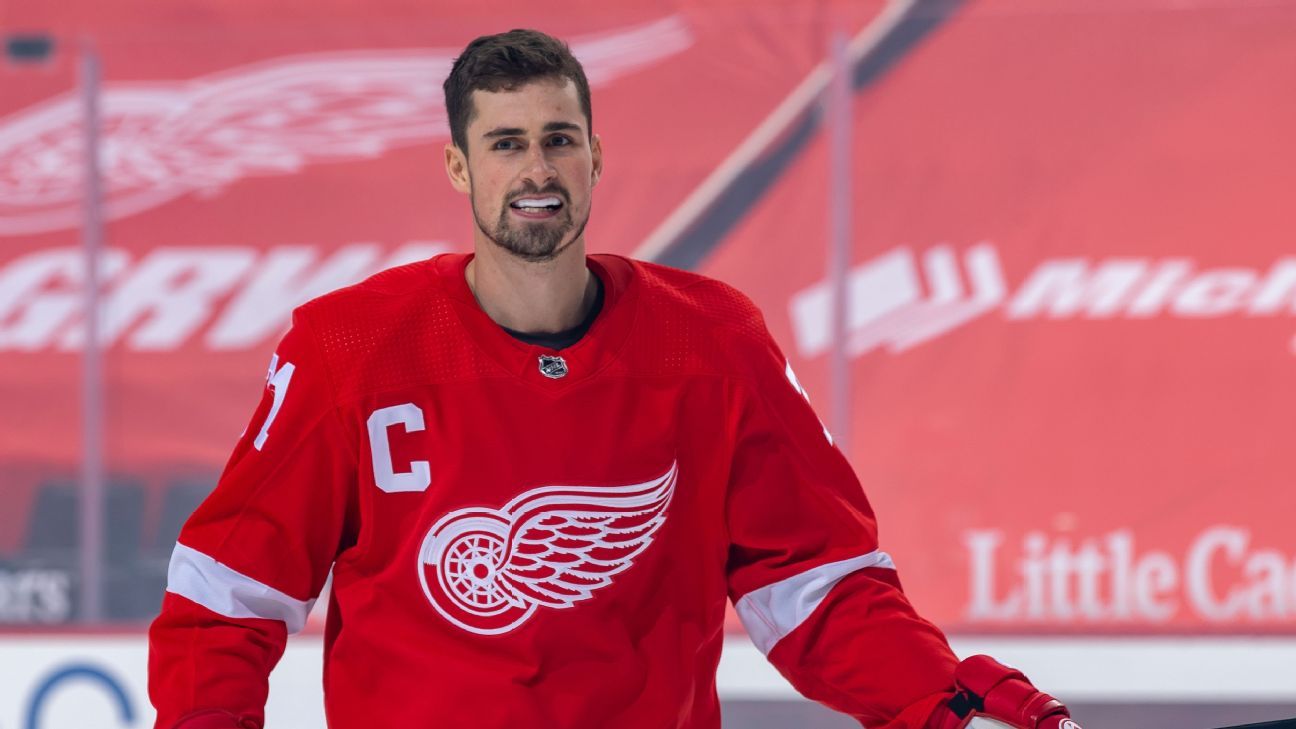 FORT LAUDERDALE, Fla. — Detroit Red Wings captain Dylan Larkin said Thursday that he hopes to remain with the team beyond this season as his contract talks have gotten uncomfortably public.

Larkin, 26, is in the final year of a five-year, $30 million contract with the Red Wings. He is set to become an unrestricted free agent this summer.

“I’ve said it all along, and I stand by it: I really see myself as a Red Wing. [But] there’s contract negotiating to be done,” said the Detroit center, who was named to the Atlantic Division team for this weekend’s NHL All-Star Game. “This is my first time in this position as an unrestricted free agent. But I doubt contracts really ever go smoothly until they’re done.”

The Detroit Free Press reported Red Wings general manager Steve Yzerman had offered Larkin an eight-year contract worth $64 million. Speculation about an impasse between the sides has grown, especially with the NHL trade deadline approaching on March 3. Larkin has a full no-trade clause this season.

“I wouldn’t say that, like, the [contract news] that’s been made public is really the most truthful,” Larkin said. “It just seems people are fishing and speculating. I don’t really want my business out there. I understand we’re in the spotlight and fans want to know. They deserve to know. But I think it’s not really the most truthful, you know? It’s just speculation, and I don’t really read into that too much.”

Larkin said being able to focus on hockey has “been a blessing” as the talks have continued. He said he doesn’t take his role as team captain lightly.

“I take great pride in how I carry myself. There’s been some very difficult days and difficult seasons,” said Larkin, whose only playoff appearance in his eight-season NHL career was as a rookie in 2015-16.

Larkin, Detroit’s lone participant in the All-Star Game, is scheduled to compete in the NHL fastest skater event in Friday’s NHL All-Star skills competition. He won the event in 2016.

FORT LAUDERDALE, Fla. — Kim Davis sees a change in hockey from when she was a girl growing up in Chicago. Back then, she said, the sport didn’t seem like a place for Black girls like her.

“There were no intentional messages that said the sport was for me, or for us,” said Davis, the NHL’s executive vice president of social impact, growth and legislative affairs.

That is slowly changing, Davis said.

She was hired in 2017 to lead diversity and inclusion initiatives in a league that has been criticized for its efforts in those areas. As the NHL prepares for its All-Star celebration in South Florida, its attempts to increase diversity continue to attract attention, not all of it positive.

Some have questioned the NHL’s commitment to change, and others have resisted some of its diversity efforts. Davis said the league hopes to combat criticism by holding itself accountable and “proving people wrong.”

“We don’t mind the hard questions being asked,” Davis said, “as long as the assessment is fair.”

As the start of Black History Month coincided with the All-Star events, the NHL debuted a mobile museum that highlights minority and underrepresented contributors to the game, from Angela James, who was the first Black woman inducted into the Hockey Hall of Fame, to Kevin Weekes, the former NHL goalie who became the first Black former player to be a hockey analyst on national television.

“Inclusion is what’s most important because you can be diverse, but if you’re not inclusive, what’s the point of having diversity?” said Jeff Scott, the NHL’s vice president for community development and growth, who helped with the museum’s creation. “What we’re showing here with this experience is the representation of access and opportunities.”

Scott, who is Black, mentioned that hockey did not appear to be an option for him growing up. The goal of the museum, which is set up inside a bus that the league plans to bring to all 32 NHL markets, is to help eliminate some of the same barriers to entry into the sport that existed when he was young.

“Had I known that there was an option, or there were people out there that look like me,” Scott said, “I may have been more inclined to do that.”

The league in October released an internal demographic study of its staff and 32 teams. The report found that the NHL’s workforce is 83.6% white with men making up 62% of the total, based on the 4,200 people who participated in a voluntary and anonymous survey (about 67% of all employees). More than 90% of the league’s players and nearly all of its coaches and officials are white.

Davis said the league plans to update the survey every two years to mark its progress.

“We knew our demographics would be controversial at best,” Davis said, “but we wanted to be transparent because we are holding ourselves, first of all, accountable to the change.”

By the time the next report is released, Davis said she hopes both fans and employees feel more welcomed by the league.

“The word I like to use is ‘intentionality,'” Davis said. “We’re being intentional about making sure that people who otherwise have not seen the sport of hockey as something that was accessible to them, see it as accessible.”

One of those ways is through the NHL’s “Pathway to Hockey” summit, which encourages newcomers to learn about hockey and consider careers in the NHL by telling the stories of people who work for the league.

“We do not abide by the woke notion that discrimination should be overlooked if applied in a politically popular manner or against a politically unpopular demographic,” Bryan Griffin, DeSantis’ press secretary, said in a statement. “We are fighting all discrimination in our schools and our workplaces, and we will fight it in publicly accessible places of meeting or activity. We call upon the National Hockey League to immediately remove and denounce the discriminatory prohibitions it has imposed on attendance to the 2023 ‘Pathway to Hockey’ summit.”

The NHL, after revising the post, held the summit in Fort Lauderdale as planned, with more than 120 attendees, Davis said. She estimated that the participants had an average age of 25.

As recently as five years ago, Davis added, the league likely wouldn’t have been able to attract a diverse pool of people in that age group.

“When you’re not visible, a lot of times you’re nonexistent,” Scott said. “We as a league are hyper-focused on what the future and growth of our game looks like while also sustaining and maintaining our current fan base.”