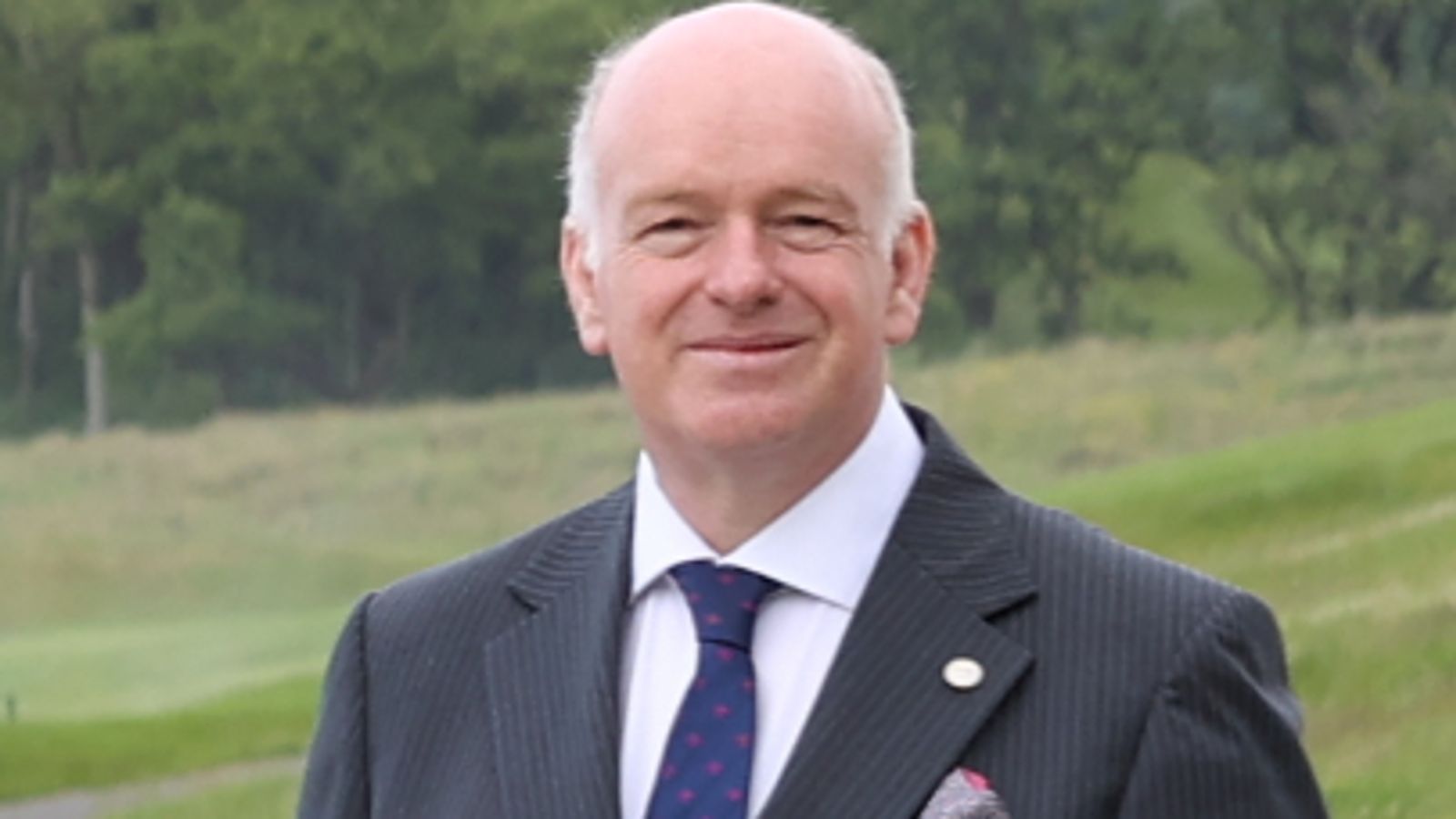 “It’s Howard o’clock” has become a slogan used on swimsuits, t-shirts, bags, mugs, bottles of wine and, even, turned into a monopoly-style drinking game.

But while Isle of Man chief minister Howard Quayle might have become an almost cult-like personality during the COVID crisis, he was also working 20 hour days, scrambling to purchase an oxygen-generating plant, and taking the “hardest decisions in my life”.

As he prepares to step down from his role next month, Mr Quayle also spoke to Sky News about the island’s strict coronavirus quarantine rules – which led to some people being imprisoned – and the effect of Brexit on the Isle of Man.

“At ‘Howard o’clock’ at 4pm every day, people would stop, get a drink and sit and listen to the briefings to let them know what was going on,” he said, as the chief minister explained how his televised news conferences gripped the Isle of Man’s 85,000-strong population last year.

The 54-year-old described the “bizarre” notion of people now wanting selfies with him, as the number of people who now recognise him on the island has rocketed, but also how he was “delighted” at the “community spirit” that was generated in the fight against coronavirus.

In March 2020, as COVID struck the world, Mr Quayle was utilising the Isle of Man’s engineering sector to leverage contacts around the world in order to secure PPE, while he faced a dilemma over ensuring the island did not run short of oxygen.

“We had always brought in our oxygen in bulk – a container or tanker would come over on a boat and fill up our holding tanks,” he said.

More on Isle Of Man

“That would last us a fortnight in normal times for our hospital. But, obviously with COVID we were under the impression we needed a shedload more.”

With a fear that supplies could be interrupted – as well as the thought a tanker journeying to and from the Isle of Man might have supplied four or five hospitals in the UK during the same time – Mr Quayle moved to buy the last oxygen-generating plant in Britain.

“If I hadn’t bought it by lunchtime, it was going to go to the Nightingale hospital in London,” he added.

The next challenge was to build a shed in which to store the plant, as well as create a hospital unit ready to accept COVID patients. And, later, a testing centre was established at the island’s famous TT grandstand.

But there were also tough actions to be taken.

“One of the hardest decisions of my life was stopping people coming back to the island who were island residents,” Mr Quayle said.

“We’d given them warnings, we’d told them ‘get home, we’re going to be shutting shortly’.

“Some didn’t heed the warnings and we did shut down. But once we’d eliminated COVID, we were the first place in the British Isles – if not Europe – to open up internally with no restrictions.”

Until January this year, residents on the Isle of Man enjoyed a freedom to their lives that those in the UK didn’t, but “somebody broke the rules, got in, and we had to lockdown again”.

That freedom was, in part, provided by the taking of other robust decisions.

“If you broke our quarantine rules, if you put people’s lives at risk and you were caught, you went to prison,” Mr Quayle said.

He admitted that the handing out of prison sentences caused a degree of outrage, including when a group of welders from Newcastle were caught in a supermarket when they were supposed to be isolating.

How were they caught? Because they “went in there wearing masks” when the rest of the Isle of Man’s population had no requirement to, due to their zero number of cases.

Although the Isle of Man is a self-governing British Crown Dependency sitting in the Irish Sea, the island was “treated as if we were in Coventry or Cornwall” when it came to the coronavirus crisis, which has seen more than 7,000 cases and 48 deaths on the island.

Mr Quayle explained that the relationship between the island and London “really improved dramatically” following Brexit, even despite the chaos that was occurring in Westminster after the 2016 referendum.

“We were lucky that we were getting information really quickly – historically that hasn’t always been the case,” he said.

“The ability for our offices to speak to their UK counterparts and discuss problems and get information back – so that we can prepare our legislation to make sure we’re compliant and get our industries ready for whatever’s going to happen – is the best it’s ever been.

“We don’t want to slip back to the old way.”

However, a closer relationship with Westminster doesn’t appear to stretch to all aspects of UK government thinking.

Mr Quayle said his government “had no involvement whatsoever” in Boris Johnson’s purported plan for road tunnels between Great Britain and Northern Ireland, to conjoin in an underground roundabout beneath the Isle of Man.

“We looked upon it with a level of bemusement!,” he admitted.

He added it “would have been nice to have that connectivity” but doubted whether the level of vehicle traffic would make such a project economically viable.

“It was a little bit frustrating that people just hadn’t thought it through – it was a good soundbite, but I never thought it was going to happen,” Mr Quayle said.

“We have our regular flights, we have our ferry service, it would have been nice to have but I couldn’t see the British taxpayer getting a return.

“At the end of the day you’ve got to get bang for your buck.”

But while Brexit may have brought benefits, recent staff shortages – especially in hospitality – on the Isle of Man are “probably an element” of the UK’s exit from the EU, coupled with the historically low unemployment rate on the island.

“We need to attract more people to come to the island and that’s something we’re working on,” Mr Quayle said.

“We help, we offer grants and things to 20-40-year-olds, we’re looking to attract entrepreneurs.”

And he touted the island’s countryside, with a UNESCO status as a biosphere region; along with its numerous dark sky sites for galaxy-gazing, low crime rates, and a recent boost to internet speeds, as pull factors for those in the UK who now find themselves mainly working remotely.

“We had an IT company who relocated to the island and we didn’t know how that would go – it went exceptionally well,” he said.

“Because people who were working on software would go home and within 10 minutes they could be on their mountain bikes in a plantation.”

But Mr Quayle, who is standing down next month after the island’s upcoming general election, will leave a decision on whether the Isle of Man will copy the UK in taking Afghan refugees, following Afghanistan’s capture by the Taliban, to whoever succeeds him as chief minister.

So, as his five-year term as chief minister comes to an end, are there any regrets?

“I’ve given it my best, you’re always going to make mistakes, I’m not perfect,” he said.

“Everything I’ve done has always been, in my head, what’s the best I could do for the island so I don’t have any regrets.

“With COVID, hindsight is a wonderful thing and, if we’d shut down a week earlier, we would have had even less cases.”

But he added: “There was no manual. We were all making it up, in all jurisdictions, as we were going along.”