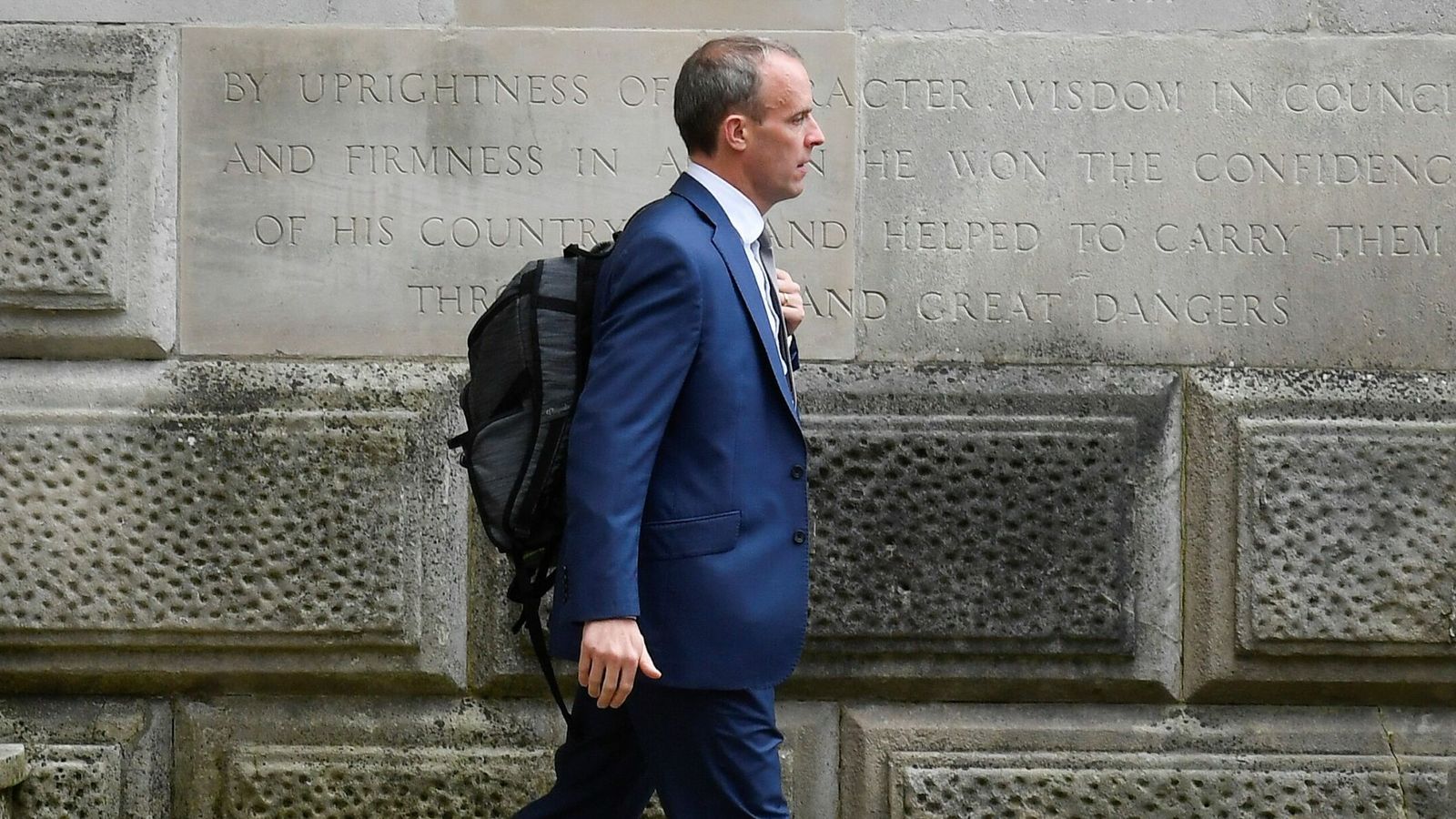 Gavin Williamson has been sacked as education secretary in a cabinet reshuffle that has also seen Dominic Raab removed from the Foreign Office.

Mr Raab, who had been heavily criticised for his handling of the Afghanistan crisis while foreign secretary, will now become justice secretary and deputy prime minister.

He has been replaced as foreign secretary by Liz Truss, who was formerly the international trade secretary.

Mr Raab’s change of roles is the most high-profile move in a reshuffle of cabinet ministers being carried out on Wednesday by Prime Minister Boris Johnson.

Earlier, Number 10 confirmed Mr Williamson had been removed as education secretary, while Robert Buckland and Robert Jenrick have also departed their roles as justice secretary and housing, communities and local government secretary, respectively.

All three have left the government entirely, with Mr Williamson being replaced by Nadhim Zahawi, who was previously the COVID vaccines minister.

Mr Jenrick will be replaced by Michael Gove, with Downing Street saying the long-time minister will also take on “cross-government responsibility for levelling up”.

Mr Gove has become the fourth secretary of state at the Ministry of Housing, Communities and Local Government since its rebrand in 2018.

It has been a privilege to serve as Education Secretary since 2019. Despite the challenges of the global pandemic, I’m particularly proud of the transformational reforms I’ve led in Post 16 education: in further education colleges, our Skills agenda, apprenticeships and more.

Amanda Milling was another victim of the reshuffle, as she left her role as Conservative Party co-chair less than three weeks before the Tory conference in Manchester.

It follows the Conservatives’ recent loss in the Chesham and Amersham by-election and a failure to take the Batley and Spen seat off Labour.

Ms Milling will be replaced by Mr Dowden, who will also become a Cabinet Office minister after moving from his job as culture secretary.

Nadine Dorries, who has written a number of novels and previously appeared on TV show I’m A Celebrity, has replaced Mr Dowden as culture secretary after moving from her role as a health minister.

The criticism of Mr Raab’s handling of the Afghanistan crisis included anger at his decision to take a summer holiday as the country fell to the Taliban.

There were also reports of tensions between Mr Raab’s Foreign Office and the Ministry of Defence during the air evacuation of British nationals and eligible Afghans from Kabul last month.

In 2020, Mr Raab deputised for Mr Johnson while the prime minister was treated in intensive care with COVID-19.

And he will now formally take on the role as deputy prime minister after the position was revived by Mr Johnson.

The last deputy prime minister prior to Mr Raab was former Liberal Democrat leader Nick Clegg as part of the coalition government.

Mr Raab, a former lawyer, has also been appointed the sixth justice secretary in six years as he replaces Mr Buckland.

In a Twitter post on Wednesday afternoon in which he revealed his departure from the cabinet, Mr Williamson said it had “been a privilege to serve as education secretary since 2019” and that he was “particularly proud of the transformational reforms I’ve led in post-16 education”.

He added he would “look forward to continue to support the prime minister and the government”.

It has been an honour to serve in Government for the last 7 years, and as the Lord Chancellor for the last 2.

I am deeply proud of everything I have achieved. On to the next adventure

Mr Williamson had faced regular criticism of his handling of the education brief during the COVID-19 crisis, including over the pandemic-enforced shutting of schools and a fiasco over the awarding of A-level and GCSE grades.

As a former Tory chief whip, Mr Williamson was widely credited with securing the vast support for Mr Johnson among Conservative MPs during the party’s 2019 leadership contest.

He was previously campaign manager for Theresa May’s successful leadership campaign and – with a reputation as one of Westminster’s most formidable organisers – it has been suggested he could prove to be a threat to Mr Johnson on the back benches.

It is the second time Mr Williamson has been sacked from government, following his departure as defence secretary in 2019 over a row about the leaking of information about Huawei’s involvement in the UK’s 5G network.

Mr Buckland also posted on Twitter to confirm his departure from cabinet.

He said he was looking to “the next adventure” and that he was “deeply proud of everything I have achieved” after serving in government for the past seven years.

Mr Jenrick, who last year was at the centre of a row over planning approval granted to a Conservative donor, tweeted that it had been a “huge privilege” to have led the Ministry of Housing, Communities and Local Government (MHCLG).

“Thank you to everyone at the department for their hard work, dedication and friendship. I’m deeply proud of all we achieved,” he added.

“I will continue to support the prime minister and the government in every way I can.”

It’s been a huge privilege to serve as Secretary of State @mhclg. Thank you to everyone at the department for their hard work, dedication and friendship. I’m deeply proud of all we achieved.

I will continue to support the Prime Minister and the Government in every way I can.

The prime minister is expected to complete the reshuffle of his cabinet today, with changes to lower ministerial ranks to be finalised on Thursday.

Confirmation that Mr Johnson would hold a widely-anticipated reshuffle of his ministers came during Wednesday’s session of Prime Minister’s Questions.

A Number 10 source said Mr Johnson would look to “put in place a strong and united team” to help the country recover from the COVID pandemic.

They also said the prime minister was looking for his government to “redouble our efforts to deliver on the people’s priorities” and Mr Johnson would appoint ministers “with a focus on uniting and levelling up the whole country”.

At a briefing for Westminster journalists, the prime minister’s official spokesman said Mr Johnson had not consulted his wife Carrie on the reshuffle.

Earlier in the day, Mr Johnson’s former chief adviser Dominic Cummings had branded the imminent moving of ministers as the “Carrie Reshuffle”.

Labour deputy leader Angela Rayner welcomed Mr Williamson’s removal as education secretary, but added: “He should have been sacked over a year ago.

“That prat’s absolute idiocy, failures and uselessness have damaged the life chances of our country’s children and this government has failed young people, teachers and education staff.”