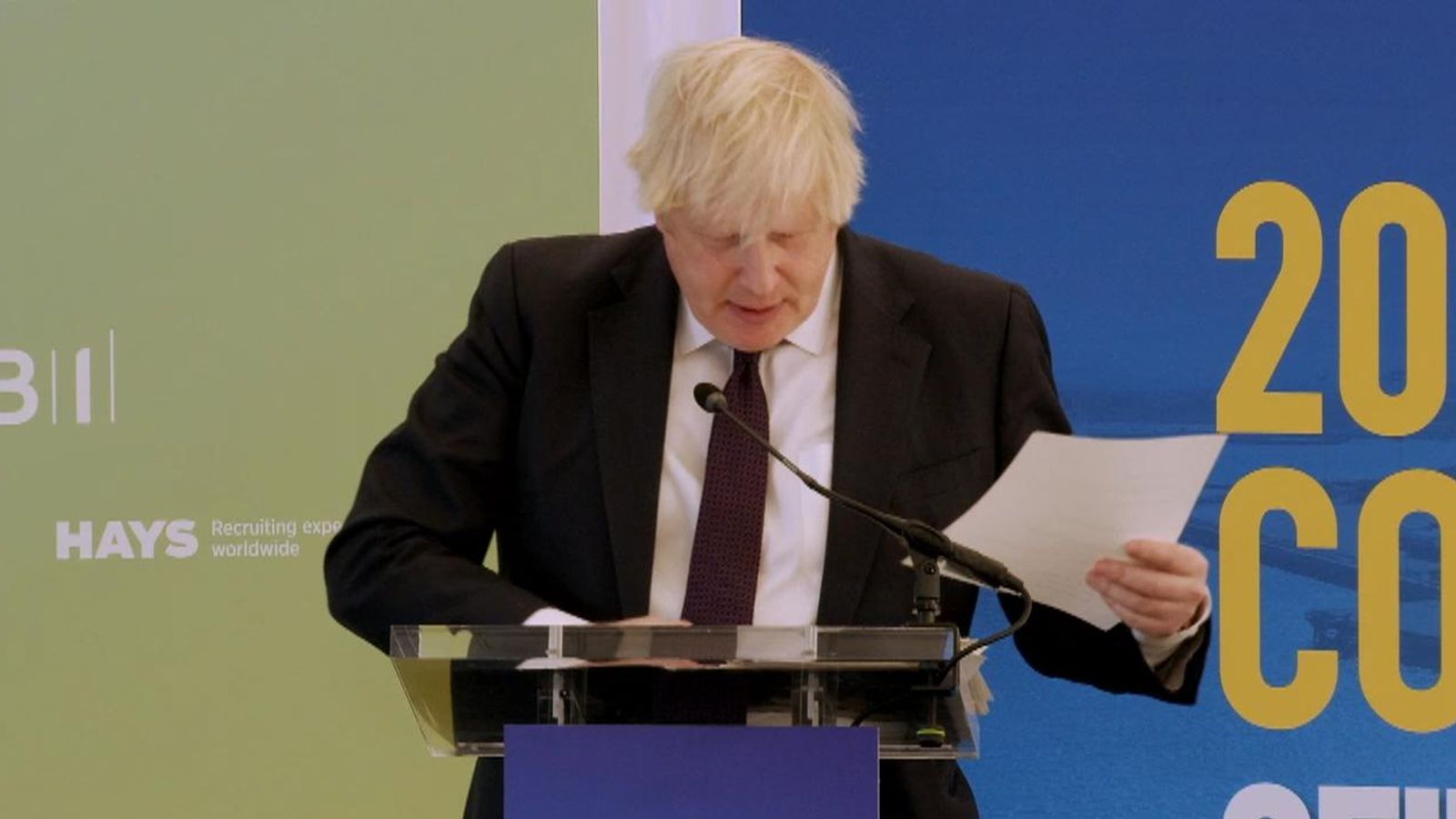 Opposition politicians have ridiculed Boris Johnson after he struggled to get through a keynote address to business leaders, despite claiming afterwards he thought the speech “went over well”.

In the speech to the Confederation of British Industry, the prime minister praised the cartoon Peppa Pig, made car engine noises, and compared his 10-point plan for a green economy to the biblical 10 commandments.

There was an awkward silence part the way through, as Mr Johnson appeared to lose his place and was left shuffling sheets of paper. He muttered “blast it”, before saying “forgive me” to the crowd.

The speech was billed as an opportunity for Mr Johnson to set out how his green policies could contribute to the government’s “levelling up” agenda.

It included an announcement of a plan to require all new homes in England to have charging points for electric vehicles installed.

But events in South Shields went off at a tangent when Mr Johnson reflected on a trip he made at the weekend to a Peppa Pig World theme park in Hampshire, which he said was “very much my kind of place” but “they are a bit stereotypical about Daddy Pig”.

Mr Johnson’s reference to the children’s cartoon was used to make a point about the importance of the private sector.

He said: “No Whitehall civil servant could conceivably have come up with Peppa”, which has become a multi-billion dollar business with theme parks across the world.”

Mr Johnson also mimicked the sound of a car engine as he explained electric vehicles move “off the lights faster than a Ferrari”.

And when discussing his 10-point plan for a green economy, the prime minister compared himself to the biblical Moses, describing the policy as “a new Decalogue that I produced exactly a year ago when I came down from Sinai”.

Labour’s shadow chancellor Rachel Reeves said: “The prime minister’s shambolic speech today not only shows how unseriously he takes British business, but also how his government lacks any plan for growth or to propel our enterprising nations forward.”

Liberal Democrat leader Sir Ed Davey said: “Businesses are crying out for clarity. Instead, all they got was Boris Johnson rambling on about Peppa Pig.”

After the speech Mr Johnson was asked by a reporter: “Is everything OK?”

He responded: “I think that people got the vast majority of the points I wanted to make and I thought it went over well.”

He said he had heard what the prime minister had said, but made no direct reference to the speech.

Sir Keir pledged to make it his “mission” to raise the level of skills of a generation of young people entering the workplace and offered a new “contract” between business and the Labour Party.

“As Labour advances its new – more consultative – ‘contract with business’, the CBI will play its part. In providing Sir Keir and his team with expert business insight, we can help Labour’s economic policies stay on the path of enabling growth rather than hampering it.”