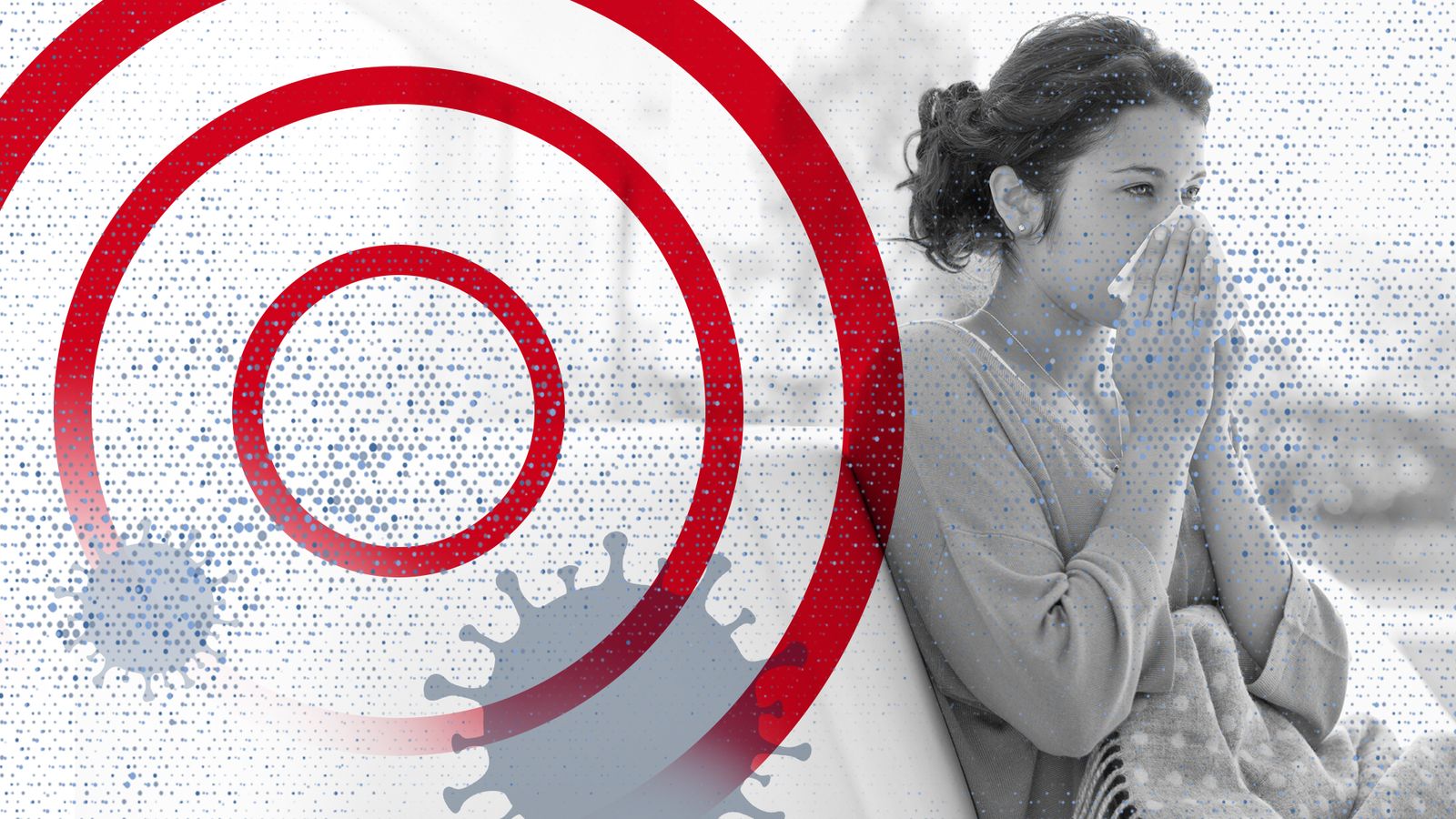 A new and more infectious version of the Delta variant now accounts for 15% of coronavirus cases in the UK, according to the latest government data.

AY.4.2 is an evolutionary spin-off of the original Delta variant first found in India.

The UK Health and Security Agency (UKHSA) designated it a ‘variant under investigation’ on 20 October.

Data shows it made up 14.7% of sequenced cases in the week ending 6 November and is continuing to grow.

But as AY.4.2 starts to take over, Sky News looks at how the new variant could affect people’s COVID immunity in the run-up to Christmas.

AY.4.2 is a sub-lineage of the Delta variant.

There are currently nine versions of Delta present in the UK.

But government experts have classified AY.4.2 as a ‘variant under investigation’ because it has accounted for a “slowly increasing proportion of cases in the UK” since September.

Imperial College London’s REACT-1 study suggested it could be up to 10% more infectious than Delta, first found in Kent in late 2020. Delta was around 60% more transmissible than Alpha.

Scientists are not sure why it appears to spread more easily.

But the latest UKHSA data suggests vaccines are just as effective against it as they are against Delta – and it could carry a slightly lesser risk of hospitalisation.

The REACT-1 study of 100,000 people between 19 and 5 November also showed only a third of people with AY.4.2 had the classic COVID symptoms of a cough, fever, loss or change in taste and smell – compared to 46% who had the original Delta variant.

Authors of the study said people with the new variant were less likely to show any other symptoms as well.

If I’ve had COVID recently, does a new variant mean I could get it again?

Both vaccines and natural infection offer varying levels of immunity from getting reinfected with COVID-19.

Previous studies have shown getting COVID gives people around 80% protection from getting reinfected within five months.

But there is not yet enough data on AY.4.2 to know how long natural immunity from the new variant might last.

This means that if you have been recently infected with AY.4.2 it is not clear whether you are largely protected from contracting the original Delta variant within the following months.

But if the vaccines are just as effective against it, catching it naturally could offer similar levels of protection, Dr Raghib Ali, of the University of Cambridge’s epidemiology unit, tells Sky News.

“We don’t have reinfection data yet,” he says.

“But what we do have is data that shows no real difference in vaccine effectiveness between AY.4.2 and Delta.

“Getting a vaccine induces an immune response that is based on the spike protein.

“And when you get infected naturally you also produce an immune response – so there shouldn’t be much difference.”

But he claims this only applies to people who have been vaccinated with two or three doses.

“In general, if you’ve been infected with Delta and you’ve had both vaccines, you should have good protection from AY.4.2 and vice versa,” he says.

A Harvard study has also showed that people who have had a combination of vaccines and natural infection have “substantially higher antibody responses” than people who have only been vaccinated.

“They have very good levels of protection,” Dr Ali adds.

“Because each time you are exposed to the vaccine or the virus, you develop an immune response.”

‘It’s not a hard shield’

Although most people develop some level of immunity from getting the virus naturally, it is not guaranteed, Dr Deepti Gurdasani warns.

“Neither natural infection nor vaccination should be seen as a hard shield,” the clinical epidemiologist at Queen Mary University tells Sky News.

“You get more varying levels of immune response from natural infection than you do from vaccination.

“Not everyone who gets infected naturally seroconverts [produces an immune response].”

She also says lower immune responses are more common in people who get no or mild symptoms, as well as children and young people.

“Some don’t produce immune responses at all,” she adds.

“If you have had two doses and a natural infection – you have got some boosted immunity, but the protection you get from both is just a layer – it’s not absolute.”

As Christmas approaches, with more socialising and case rates still considerably high, experts have warned the UK is facing a tough winter – and the NHS being overwhelmed.

And with immunity waning a few months after getting a second vaccine, both scientists are urging people to get booster jabs if they are eligible.

“There is more and more evidence that this [coronavirus] is a three-dose vaccine,” Dr Gurdasani says.

“Lots of people are at the stage now where they’re three or four-months post-vaccination and are getting breakthrough infections.

“It highlights the importance of boosters and of seeing each thing you do, whether that be a test, wearing a mask or recovering from infection, as a layer of protection – not absolute protection.”

Dr Ali adds: “The most important thing is still to have the vaccine, but it’s also true that the vaccine isn’t 100% effective.

“So if you’re mixing with vulnerable or elderly relatives over Christmas, basic interventions like taking a lateral flow test and washing your hands regularly are still important.”