The governments of Denmark, Norway, and the United States, along with the Global Maritime Forum and the Mærsk Mc-Kinney Møller Center for Zero Carbon Shipping, today announced that they will lead a new Zero-Emission Shipping Mission as part of Mission Innovation. The Mission aims to accelerate international public-private collaboration to scale and deploy new green maritime solutions, setting international shipping on an ambitious zero-emission course. The Mission will also be supported by the governments of India, Morocco, the U.K., Singapore, France, Ghana, and South Korea.

Carrying 80-90% of global trade in a less carbon-intensive manner than other freight transport modes, international maritime shipping nonetheless represents about 2–3% of the world’s total annual greenhouse gas emissions. Without immediate and concerted efforts, emissions from the sector could increase between 50% and 250% by 2050.

The three main goals of the Zero-Emission Shipping Mission are:

The Zero-Emission Shipping Mission is part of Mission Innovation, a global initiative of 24 countries and the European Commission working to accelerate clean energy innovation. The objective is to help move clean energy solutions from lab to market. Mission Innovation was announced at COP21 on November 30, 2015, as world leaders came together in Paris to commit to ambitious efforts to combat climate change.

Bill Gates & Warren Buffett To Build A New Kind Of Nuclear Reactor — Is That Good News?

This guy built a six-seater electric bike for $150, and it absolutely rips 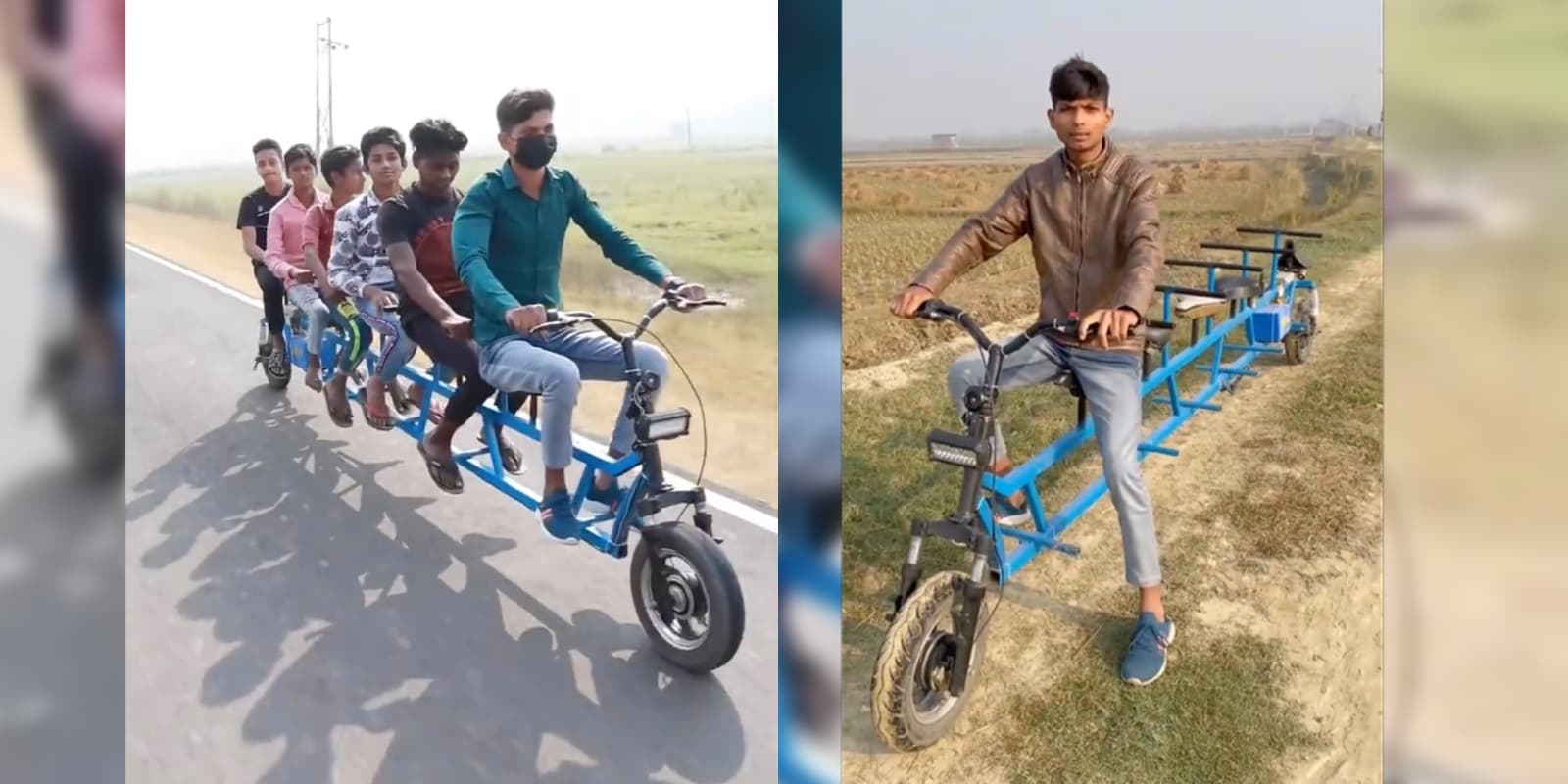 I’ve always enjoyed multi-seater electric bikes, which bring passenger-carrying utility to small-format, easy-to-produce vehicles. But I never thought I’d see the concept taken this far. At least not until I stumbled upon a six-seater electric bike that has me all kinds of jealous.

It’s no surprise where this custom e-bike originated. If you want to see the most creative and ingenious transportation solutions in the world, you have to head over to Asia.

The Chinese often get a lot of credit for some of the more wacky vehicles popping up on Alibaba, but India usually takes the cake with some of the coolest auto and motorcycle innovation on the planet. And that’s exactly where this impressive six-seater bike comes from, where it was hand-built by Ashhad Abdullah from Lohra in eastern India.

Abdullah seems to have caught my recent Awesomely Weird Alibaba Electric Vehicle of the Week entry for a three-seater electric bike and said “Hold my lassi.”

Instead of a three-seater, Abdullah doubled the capacity to six seats. His stretch-limousine electric bike looks like it wears a scooter fork on front complete with drum brake, off-road lighting kit, and even a motorcycle horn. The rear seems to hold a hub motor wheel in a swingarm supported by dual coilover shocks. There’s a battery box mounted just in front of the swingarm, though how much capacity he’s rocking seems to be a mystery.

Bridging the two ends of the bike is a bespoke ladder frame with six seats, six handlebars, and six pairs of foot pegs.

There’s no word on the turning radius, but we’d wager it’s somewhere around the width of the state of Bihar.

Abdullah created the custom-designed bike after climbing fuel prices made petrol-powered motorcycles less appealing. In total, he says the bike cost him around 12,000 INR (US $150) to build.

I’m not sure if this is technically an e-bike, at least by electric bicycle standards. It certainly looks like a tandem-style bicycle setup with bicycle seats, but the lack of pedals means it would be classified more like an electric scooter or motorcycle.

But whatever you call it, the six-seater bike has received a warm reception around the world.

The novel creation went viral on Twitter after a video of it in action was reposted by Anand Mahindra, the chairman of Mahindra Group, one of the largest automakers in India (and similar in size to GM).

It’s unlikely we’d see an awesome ride like this in the West, where safety regulations and an unhealthy aversion to two wheels would likely make this six-seater dead on arrival.

I’ll admit that it’s hard for me to argue with the safety concerns, especially when seeing six helmet-less heads and a few bare feet as well.

There are some good alternatives available in the US, at least if you’re alright with just two-seater e-bikes. But with options like a $999 Lectric XP 3.0 or a $1,499 RadRunner helping put more riders on smaller electric vehicles, the chances for sharing the fun on e-bikes are growing, even in laggard countries like the US.

We may never get six bodies on one bike, but even two would be a good start! 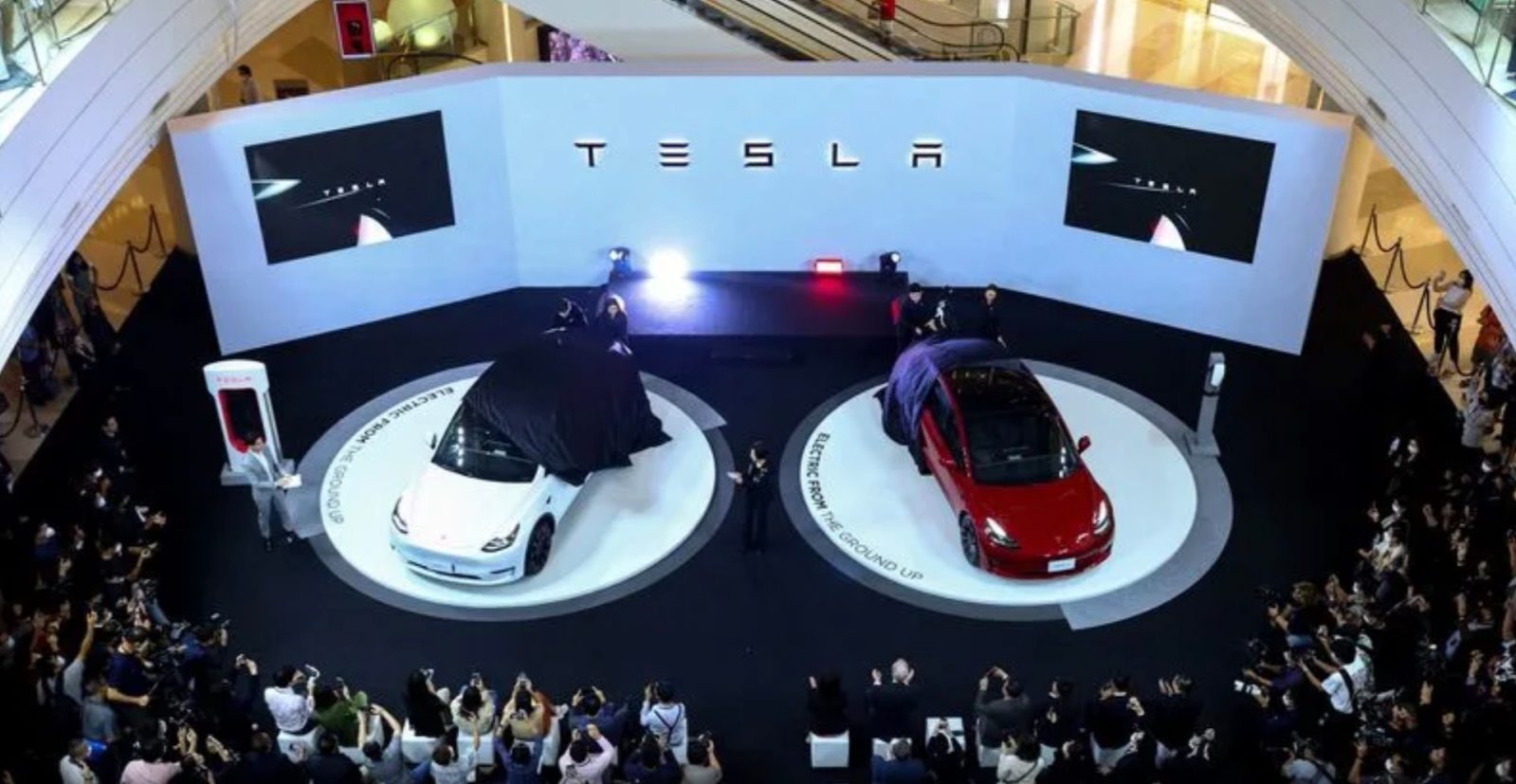 Tesla has officially launched in Thailand and opened orders for Model 3 and Model Y at competitive prices.

It has been a little while since Tesla has expanded into a brand-new market. The company was trying hard to enter the Indian market for years, but the effort was put on hold earlier this year after negotiations with the government stalled.

The automaker filed to register its product for sale in the country. That was the first indication that Tesla planned to enter the market.

In September, we reported that Tesla started to hire in Thailand – indicating that a launch was imminent.

Today, Tesla has officially launched its Model 3 and Model Y vehicles in Thailand with a small event in a luxury mall in central Bangkok.

The automaker has started taking orders through a new Thai configurator for those two models. Tesla is offering all variants of the Model 3 and Model Y for sale in Thailand:

The Model 3 starts at ฿1,759,000 in Thailand, which is the equivalent of about $50,000 USD and fairly competitive compared to other luxury EVs in the market.

Interestingly, while Tesla is starting to take orders through the new configurator, the automaker doesn’t list expected delivery windows in the country.

While we don’t know when official deliveries from Tesla will start in Thailand, there are already a decent number of Tesla electric vehicles in the country.

They have been imported privately by the owners – and that’s a factor that Tesla takes into account when considering entering a new market. If many people are willing to go through the trouble of importing the vehicle, there’s a good chance that there’s a market for its vehicles in the country.

We even reported on the Thai police buying a fleet of Tesla Model 3 vehicles for police patrol back in 2020, pictured above.

The Thai auto market is more significant than most people would think. More than 750,000 cars were sold in the market last year, and it is expected to ramp up to 800K–900K this year. However, most of those vehicles are not in the same price range as Tesla vehicles.

Thailand is also a vehicle assembly hub with up to 2 million vehicles produced locally per year.

U.S. pledges to ramp up supplies of natural gas to Britain as Biden and Sunak seek to cut off Russia

Rishi Sunak and Joe Biden photographed on the sidelines of the G20 Summit in Indonesia on Nov. 16, 2022.

LONDON — The U.K. and U.S. are forming a new energy partnership focused on boosting energy security and reducing prices.

In a statement Wednesday, the U.K. government said the new partnership would “drive work to reduce global dependence on Russian energy exports, stabilise energy markets and step up collaboration on energy efficiency, nuclear and renewables.”

The U.K.-U.S. Energy Security and Affordability Partnership, as it’s known, will be directed by a U.K.-U.S. Joint Action Group headed up by officials from both the White House and U.K. government.

Among other things, the group will undertake efforts to make sure the market ramps up supplies of liquefied natural gas from the U.S. to the U.K.

“As part of this, the US will strive to export at least 9-10 billion cubic metres of LNG over the next year via UK terminals, more than doubling the level exported in 2021 and capitalising on the UK’s leading import infrastructure,” Wednesday’s announcement said.

“The group will also work to reduce global reliance on Russian energy by driving efforts to increase energy efficiency and supporting the transition to clean energy, expediting the development of clean hydrogen globally and promoting civil nuclear as a secure use of energy,” it added.

Commenting on the plans, U.K. Prime Minister Rishi Sunak said: “We have the natural resources, industry and innovative thinking we need to create a better, freer system and accelerate the clean energy transition.”

“This partnership will bring down prices for British consumers and help end Europe’s dependence on Russian energy once and for all.”

The news comes at a time of huge disruption within global energy markets following Russia’s invasion of Ukraine in February.

The Kremlin was the biggest supplier of both natural gas and petroleum oils to the EU in 2021, according to Eurostat, but gas exports from Russia to the European Union have been signifciantly reduced this year. The U.K. left the EU on Jan. 31, 2020.

Major European economies have been trying to reduce their own consumption and shore up supplies from alternative sources for the colder months ahead — and beyond.

Top CEOs from the power industry have forecast that turbulence in energy markets is likely to persist for some time. “Things are extremely turbulent, as they have been the whole year, I would say,” Francesco Starace, the CEO of Italy’s Enel, told CNBC last month.

“The turbulence we’re going to have will remain — it might change a little bit, the pattern, but we’re looking at one or two years of extreme volatility in the energy markets,” Starace added.