The UK’s economy will bounce back to pre-COVID levels by the end of 2021 despite the end of lockdown being delayed, the CBI has forecast – a year earlier than expected.

However, the business group has warned of devastation for some still-closed sectors if they are not given more support.

The CBI has upgraded its growth forecast for this year to 8.2%, helped by a spending surge fuelled by improving household incomes and savings built up during lockdowns.

That will mean GDP bouncing back to its pre-pandemic level by the end of 2021.

The latest report said: “Despite the delay on the lifting of all lockdown restrictions for another month, the UK economy is still set for a breakthrough year.”

It said the economy was poised for “considerable economic growth over the summer” but that “this won’t be felt as strongly by those sectors still working under restrictions”.

Britain suffered its biggest annual economic decline for 300 years in 2020, shrinking by nearly 10% thanks to the pandemic. It took a further hit at the start of this year as fresh lockdowns took their toll.

The easing of restrictions since the spring has fuelled hopes of a strong bounce back, but there were fears that delaying the planned end of the measures on 21 June could hamper the recovery.

Confirmation of the four-week delay will mean some businesses such as pubs and restaurants must continue to operate at limited capacity, while others such as nightclubs must stay closed.

The government has offered a degree of relief by extending a moratorium on commercial landlords evicting struggling tenants into the new year.

But the Treasury has resisted making any further extension to the furlough scheme and business rates relief, which are both due to start tapering off by the end of this month.

Like other forecasters, it is also scaling back its fears about the rise in unemployment.

The business group estimates that a significant part of the economy’s rebound this year will come from the government’s spending to tackle COVID-19.

But it cautions that stagnant productivity and business investment will continue to drag on the longer-term outlook.

CBI director general Tony Danker said there were “really positive signs about the economic recovery this year and next” with “pent-up demand and ambition across many sectors”.

But he added: “Clearly this does not apply to the hardest hit sectors from the pandemic who even now face continued delays and genuine challenges to stay viable.

“Extending the commercial rent moratorium will help keep some firms’ heads above water, but the government must also do the same on business rates relief.

“It would be devastating for hospitality, events or aviation businesses to fail on what we hope is the last leg of restrictions.”

Joules secures Next rescue with majority of stores and jobs saved 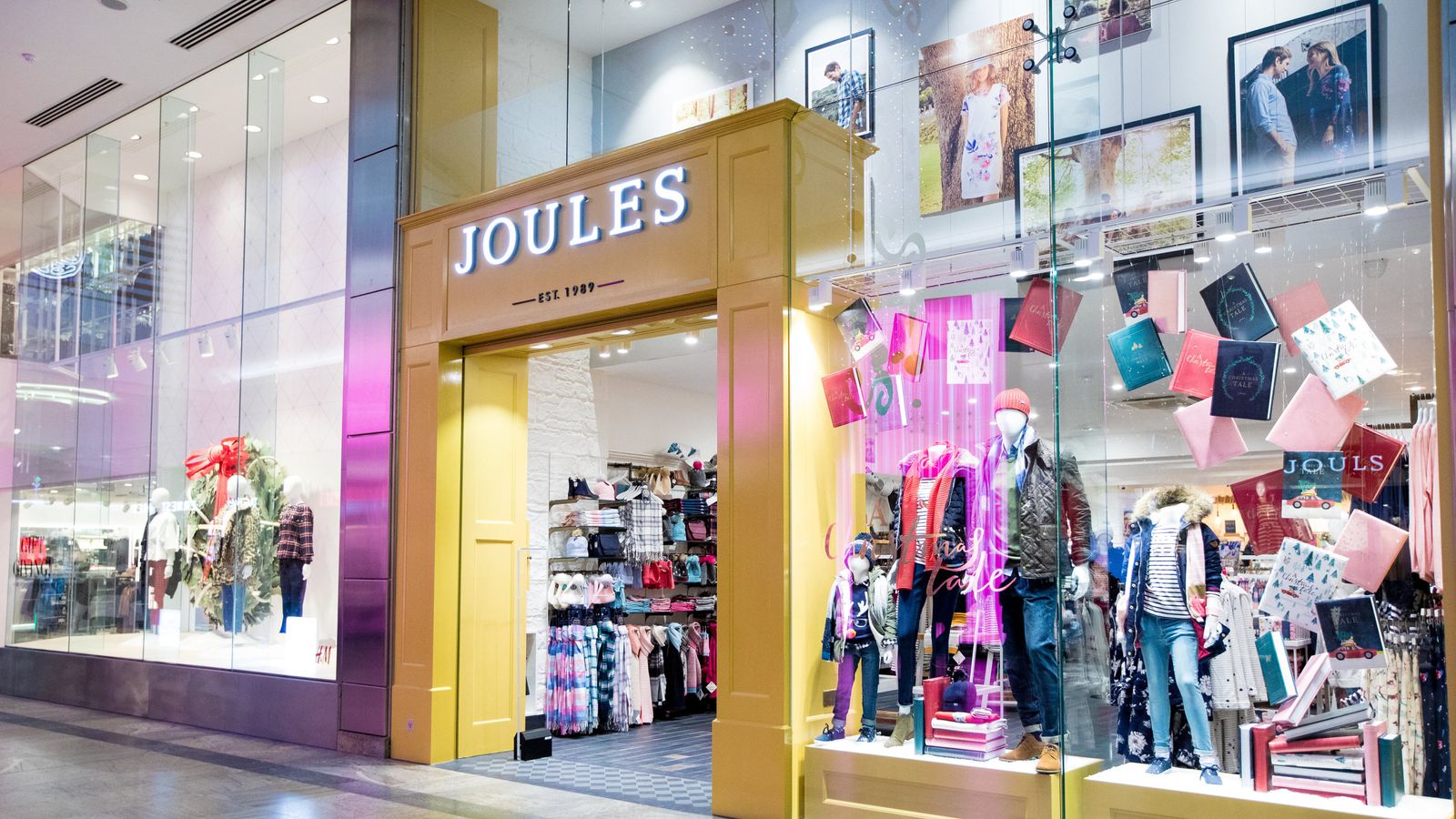 Collapsed fashion retailer Joules will live on after Next agreed a rescue deal that preserves most of its stores and jobs.

TFG, the owner of the Hobbs, Whistles and Phase Eight womenswear brands, appeared to be the frontrunner on Wednesday in an auction process to secure an agreement with Joules’ administrator, Interpath Advisory.

Joules is the second major UK acquisition for the fashion-to-homewares retailer in as many months.

Next snapped up the brand, website and intellectual property of Made.com on 9 November.

Joules had been trading as normal since a failure to secure new investment pushed it towards insolvency a fortnight ago.

The clothing, footwear and accessories retailer collapsed after its finances, profitability and cash generation came under pressure amid the cost of living crisis.

It had been in talks with both Next and TFG about new investment beforehand. 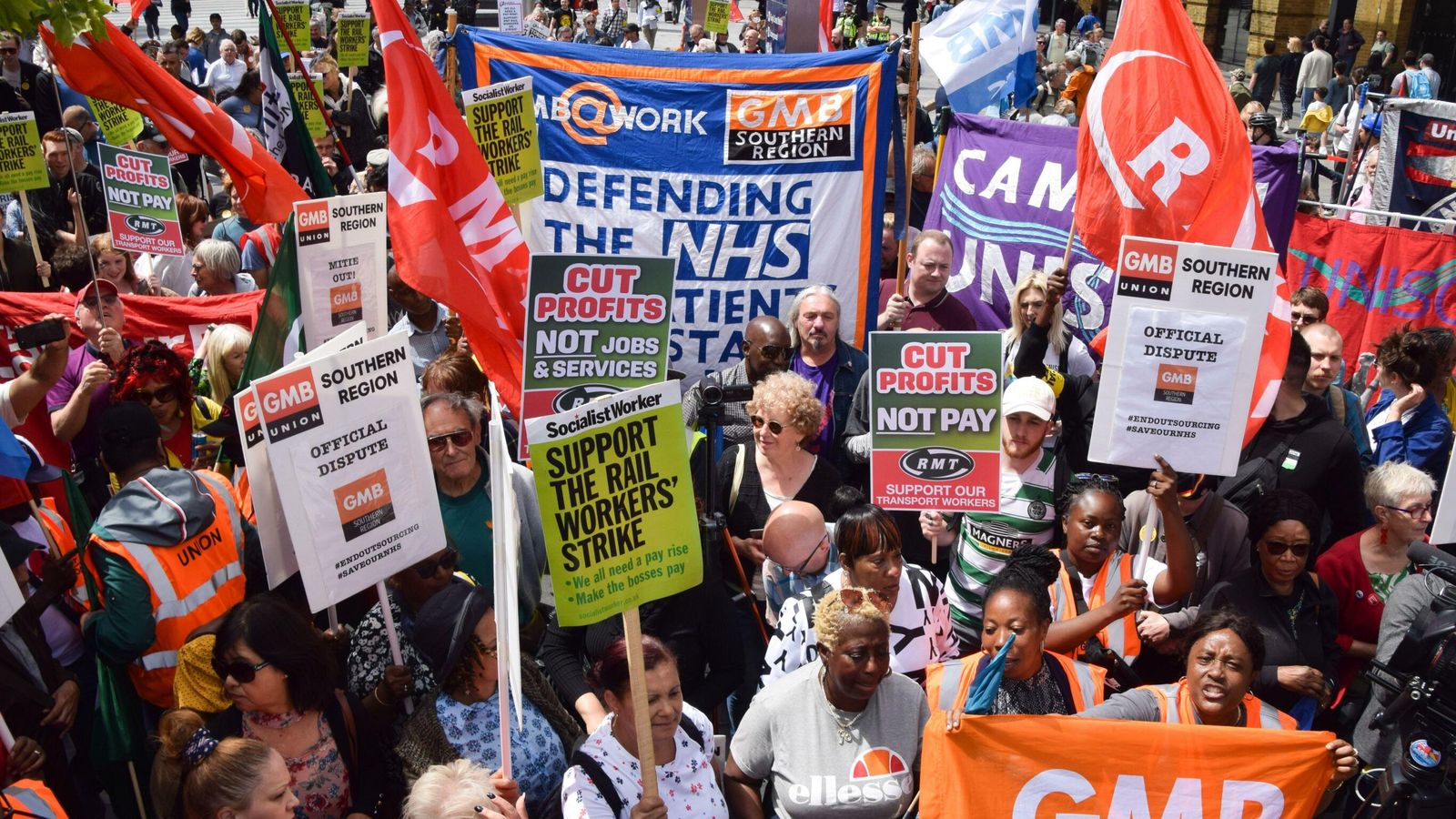 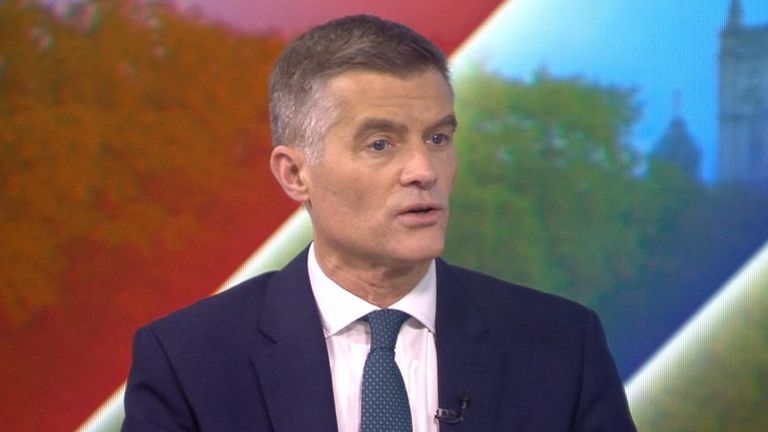 Union leaders could coordinate industrial action across the NHS this winter to cause “maximum impact”, the head of the GMB has suggested.

Andy Prendergast, the GMB national secretary, said health workers have had enough of “public school boys who run the government and simply don’t care” about their pay demands.

More than 10,000 ambulance workers from the GMB voted to strike yesterday, following in the footsteps of nurses in opting to walk out.

Asked if there will be a “coordinated strike” in the health service, Mr Prendergast told Sky News: “We will be talking to the other unions.

“We know that the nurses have got their first ballot in over 100 years. We know that our colleagues in Unite, in Unison are currently delivering ballots.

“So we’ll be looking to make sure this has the maximum impact.”

It was put to Mr Prendergast that the safety of patients could not be guaranteed if there is coordinated strike action between unions and the NHS.

He argued their safety is not being guaranteed now due to the staffing crisis, with poor pay driving many out of the profession.

“One third of our members in the ambulance service believe that they have been involved in a delay that has led to a patient dying, so this isn’t a situation where this is a service that runs perfectly well,” he said.

NHS ‘dying on its feet’

“This is a service that’s dying on its feet and our members are actually standing up and the public of Britain should support them. This is a matter of a life or death situation.”

Mr Prendergast said NHS workers “work extremely hard, often for wages that a lot of people wouldn’t get out of bed for”.

He added: “Ultimately they are saying enough is enough. It’s time for them to take action. This is the one thing that they can do to try and improve patient safety, to try and improve the terms conditions, to try and deal with 135,000 vacancies that we have among a service that we rely on.”

Paramedics, emergency care assistants, call handlers and other staff are set to walk out in nine trusts:

The industrial action is due to take place before Christmas, with the union planning to meet reps in the coming days to discuss dates.

Up to 100,000 nurses from the Royal College of Nursing are also set to stage a mass walkout in December, one of the busiest months for the NHS.

The army has been placed on stand by in case it is needed to fill roles of NHS workers on strike days.

Coordinated strike ‘can speed up negotiations’

Dr Emma Runswick of the British Medical Association told Sky News that coordination between unions will help protect patients as they can discuss between themselves how to cover urgent and emergency care.

She added that an effective coordinated strike “will help to speed up negotiations”. 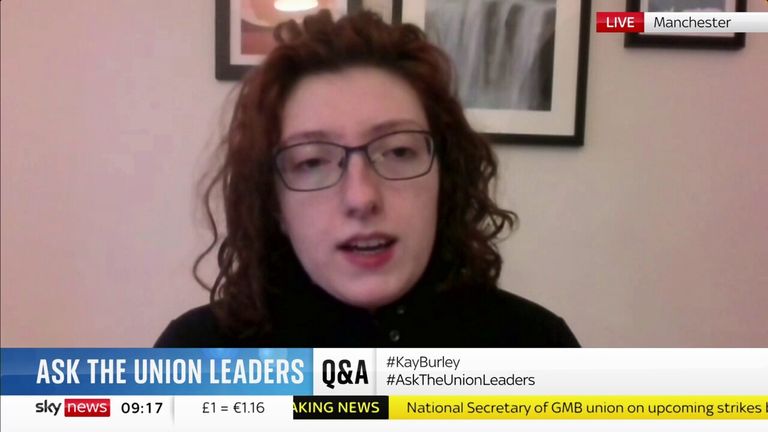 Dr Emma Runswick of the British Medical Association says an effective coordinated strike will help to speed up negotiations.

Rail workers, civil servants, firefighters and teachers are among the tens of thousands expected to take industrial action as a recession grips the UK and the cost of living rises.

Read More:
Which industries are striking this winter and why?
Eurostar security staff to strike in December, RMT union announces

Ministers have been criticised for refusing to negotiate with unions, with Business Secretary Grant Shapps saying meeting their pay demands would lead to a wage inflation “spiral”.

Eddie Dempsey, assistant general secretary of the RMT, which covers the transport sector, rubbished that argument.

“This idea that there’s going to be a wage spiral is nonsense because wages have been falling as a share of wealth in this country – what goes to wages and what goes to profits,” he said.

Mr Dempsey said that now, wages only account for around 8% to 12% of unit costs.

He pointed to a study from the Bank of England which found there was no risk of wage-induced inflation across Western economies because people have got less money.

He claimed what the government is actually worried about “is a shift in class power”.

Mr Dempsey said his union has been in negotiations for longer than six months and “every time we feel like we are making headway it has felt like the rug has been pulled out from under our feet”.

However he said there is “definitely a change of tone” with the new Transport Secretary Mark Harper and the RMT is “hopeful” a deal can be reached.

Royal Mail workers are also locked in a bitter dispute over pay and conditions, with the CEO Simon Thompson accusing union leaders of “trying to destroy Christmas” by walking out.

He claimed striking workers had demonstrated “extraordinary behaviours” and that he has heard allegations of racism, sexism and violence.

He said the union “welcomes an independent look at behaviours” of his members but the CEO’s behaviour should also be investigated.

“He goes on (social media) every single day, including weekends. and he goads our members,” Mr Ward said.

“He’s brought in a team of union and worker busters and they’re deliberately creating a psychological attack on every single worker.

“Go out and ask postal workers how they feel about this particular CEO.” 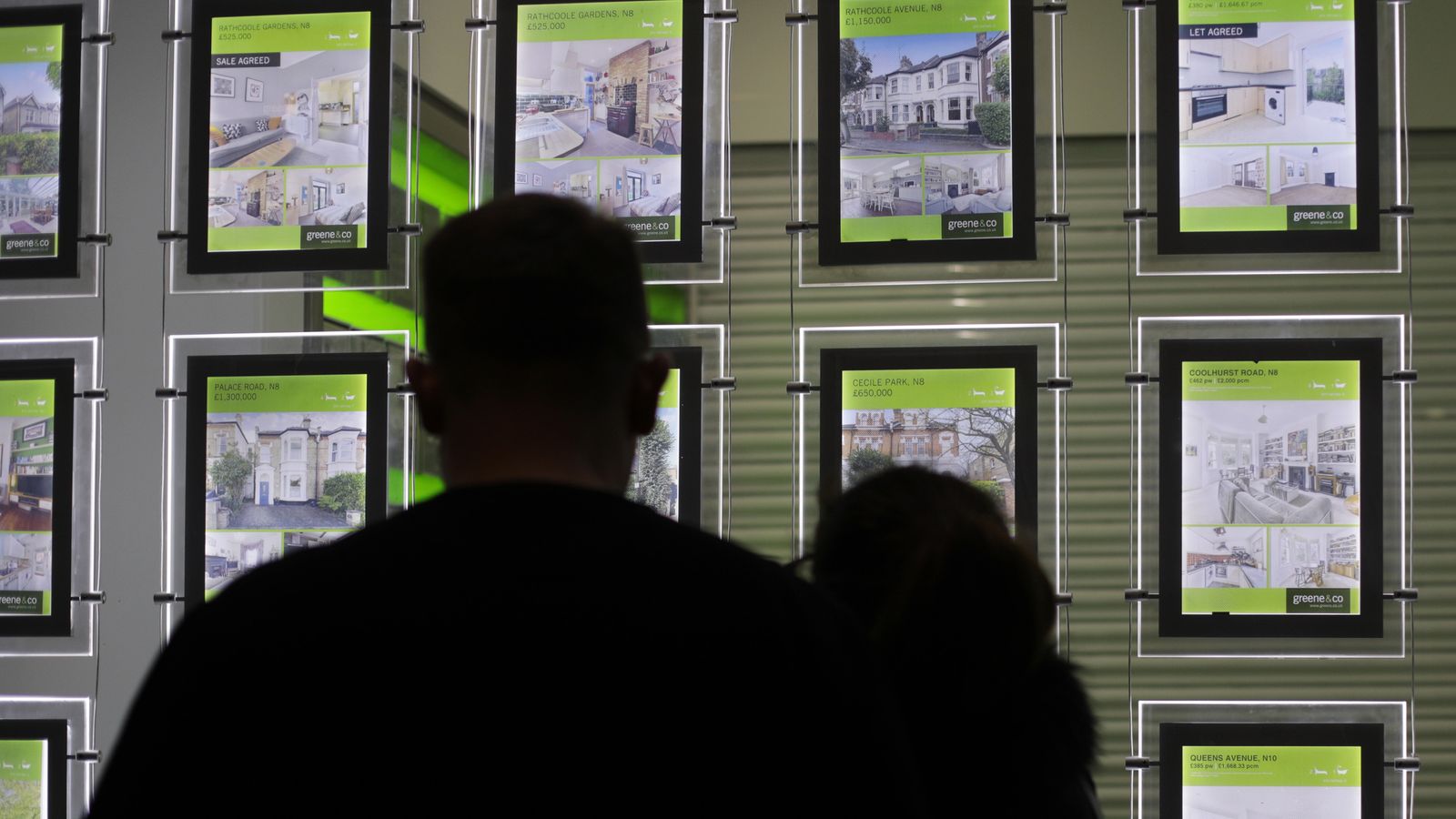 Buyers are increasingly struggling to afford homes despite prices falling faster, according to a closely watched report.

Average prices fell by 1.4% last month, up from a 0.9% drop the month before, Nationwide Building Society found.

The mortgage lender said it was the biggest monthly drop since June 2020.

The findings build on wider evidence of a marked slowdown, partly linked to rising flexible mortgage rates after successive rises to Bank rate by the Bank of England since December last year to tackle soaring inflation.

Nationwide said it was clear that wider mortgage conditions were yet to recover from the financial market meltdown that followed the Truss government’s mini-budget growth plan in September, which hammered confidence in the UK’s public finances.

Lenders withdrew offers and temporarily halted deals as the value of the pound hit a record low and borrowing costs surged.

It has been exacerbated by the wider cost of living crisis, with pay growth lagging far behind the pace of price increases in the economy.

Property website Zoopla reported this week that homes had been typically selling for 3% below their asking price in recent weeks and warned that figure was likely to deteriorate further next year.

He added: “Housing affordability for potential buyers and home movers has become much more stretched at a time when household finances are already under pressure from high inflation.

“The market looks set to remain subdued in the coming quarters. Inflation is set to remain high for some time and Bank rate is likely to rise further as the Bank of England seeks to ensure demand in the economy slows to relieve domestic price pressures.”