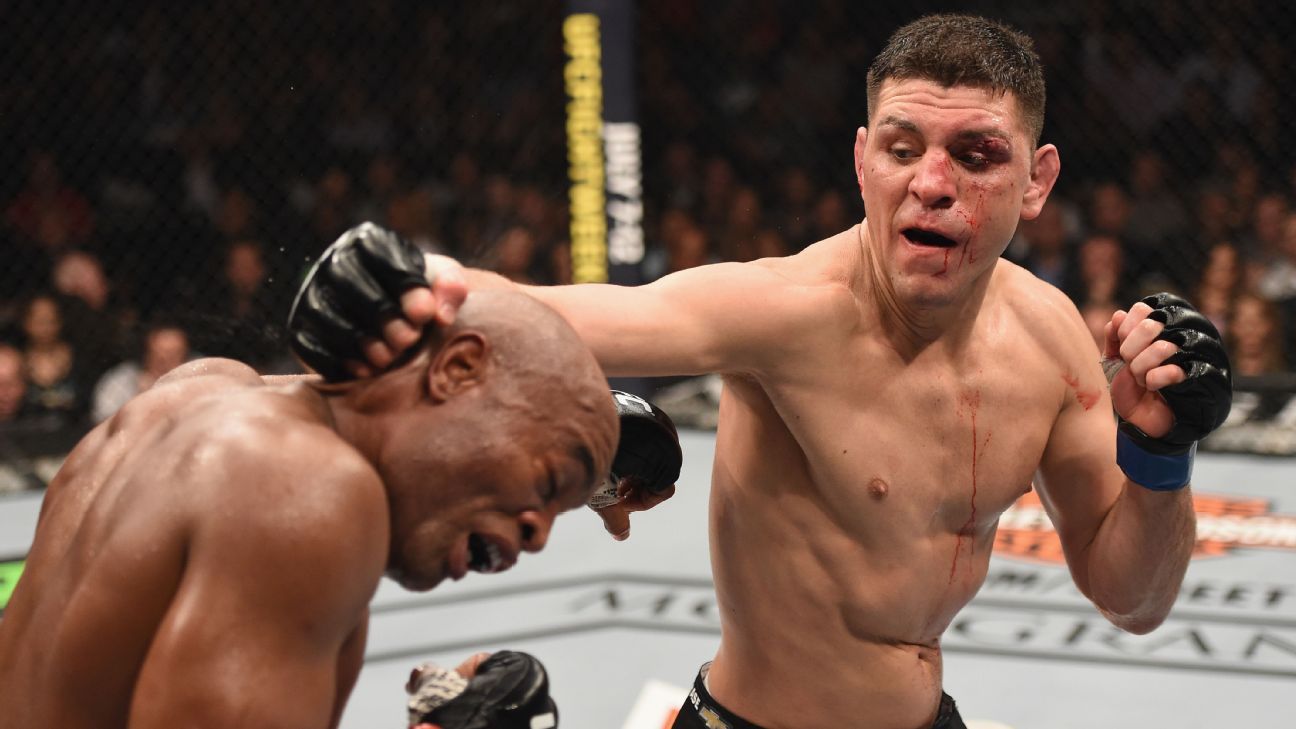 Any pay-per-view with two title fights is going to capture the attention of the sport, but on Saturday night at UFC 266, it’s the third fight on the card that has most fight fans talking. Nick Diaz will walk to the Octagon for his first fight since 2015 to face Robbie Lawler in a rematch 17 years in the making. What can we expect when he returns?

In the main event of UFC 266, Alexander Volkanovski defends the featherweight title against Brian Ortega. The two spent plenty of time together during the latest season of The Ultimate Fighter, but will that experience impact the outcome? Ortega’s last title fight didn’t go his way — will this time be different?

The other champion on the card, Valentina Shevchenko, hopes nothing will be different in her upcoming fight against Lauren Murphy while Curtis Blaydes may have to adjust his strategy against Jairzinho Rozenstruik.

We’ll be impressed by Nick Diaz in his return

Prior to that bogus suspension for marijuana in 2015, which ultimately led to his six-year absence, Diaz had only fought once in the span of 22 months. And when his career was derailed by a — I’ll say it again, bogus — suspension, he veered hard into a civilian lifestyle.

Diaz has not always lived the life of a professional athlete over the past six years. He’s had somewhat of a tortured relationship with fighting in general. He doesn’t love it, but he knows he’s good at it and it’s his means of income. Trying to figure out Diaz’s level of motivation, his reasons for fighting or even his enthusiasm around this return … it’s impossible. And I think that obviously matters a lot, when trying to guess what he’ll look like on Saturday. Because if Diaz doesn’t truly want to be here and he has reservations about being here, that will show.

And if that is the case, then no, we won’t be impressed. We’ll probably say he should never do this again.

I’m genuinely excited and curious about Diaz’s return, but I’m going in with no expectations. This has an equal chance of going really well or really badly.

Raimondi: When Brian Ortega first challenged for the UFC featherweight title, against Max Holloway at UFC 231 on Dec. 8, 2018, he was 27 years old and already being dubbed as the UFC’s next golden boy. Ortega was hanging out with actor Robert Downey Jr., getting endorsement deals with high profile companies like Body Armour and — with his good looks, charisma and exciting fighting style — seemed primed to be the promotion’s newest crossover star.

Two title fights and the return of a MMA icon highlights UFC 266 on Saturday, Sept. 25. Alexander Volkanovski defends his featherweight title against Brian Ortega in the main event while Valentina Shevchenko puts her flyweight title on the line against Lauren Murphy. In a rematch 17 years in the making, Nick Diaz fights Robbie Lawler.

That all hit a speed bump when Holloway beat Ortega by fourth-round TKO. Holloway hit him with everything he had, but Ortega kept coming until the doctor pulled the plug before the fifth round. Ortega showed a ton of heart, but he also showed he wasn’t quite ready yet to become champion. And perhaps those lofty expectations were too much, too soon.

It is no longer too soon for Ortega, which is why I’m saying “real” to this statement. He’s 30 years old and going into this next title challenge, against Alexander Volkanovski on Saturday at UFC 266 in Las Vegas, like a new man. He’s changed up his coaching staff. His striking game has improved drastically. Ortega really showed marked growth in his unanimous decision win over rival “Korean Zombie” Chan Sung Jung last October. It was arguably the best performance of his career, a fight he controlled from the opening bell.

In four consecutive fights from 2015 to 2017, Ortega finished his opponents in the third round. In almost all of those bouts, Ortega was either losing on the cards when he earned the stoppage or had at least lost a portion of the fight. The showing against “Zombie” was a complete one — and actually the only fight to go to decision of his UFC run. Things were never out of Ortega’s hands then. Jung was supposed to be the better striker, Ortega the Brazilian jiu-jitsu specialist. But Ortega befuddled Jung on the feet with a new southpaw stance and crafty techniques and tactics.

Provided he brings that same style against Volkanovski — combined with his innate finishing ability — we could be talking about Ortega, finally, as UFC champion, nearly three years after he was perhaps prematurely crowned as the future 145-pound king.

Wagenheim: Shevchenko is a 14-to-1 favorite, so it’s a good bet she’ll beat Murphy. But finish her? Let’s look at Shevchenko’s recent history.

The champ has won seven fights in a row, dominating every one of those bouts but alternating between finishes and decisions. The three recent opponents who have gone all five rounds with Shevchenko — Jennifer Maia, Liz Carmouche and Joanna Jedrzejczyk — are all sturdy and resilient. So is Murphy. In 19 career fights, she has never been finished. Then again, Murphy has never been locked inside a cage with Valentina Shevchenko.

Murphy has won five straight and been in a bunch of competitive fights. Half of her most recent wins have come by split decision. I don’t expect her to put up a close fight against Shevchenko, but survive she can.

If I were a betting man, I’d hate to spend 25 minutes holding my breath while hoping for a Shevchenko’s opponent to merely make it to the final horn so I could cash a ticket. But that’s where my money would be. The above statement is not real.

Legaspi: Anyone who still thinks that the only chance for Ortega to beat Volkanovski is by submitting him is really wrong. The rivalry between this two fighters has grown for almost a year, and the fact that it was postponed and their time on The Ultimate Fighter only added fuel to that fire.

Ortega is coming off a striking clinic against one of the best in the division — and was gutsy enough to try the same in his first title fight against the self-proclaimed best boxer in the UFC, Max Holloway. Let’s not forget he was also the first one to knock out Frankie Edgar. Ortega probably has the best jiu-jitsu in the top of the featherweight division, but he barely tries to take down his opponents.

This fight could certainly play out as a long stand-up confrontation, because Volkanovski doesn’t want to risk it on the ground. So for me, this fight is likely to deliver a lot of excitement, and for that reason I’m going to say it’s “not real.” I can’t deny that the fans will go wild when Diaz steps inside the Octagon after his layoff, but it’s really hard to tell how competitive this rematch is going to be 17 years later.

There are many other fights that look promising, though. If Dan Hooker makes it for this week’s matchup against Nasrat Haqparast after days of dealing with visa issues, he will recover his spot among title contenders, provided he has a big performance. There’s also Merab Dvalishvili, who will try to make a statement by finishing an opponent for the first time in the UFC. He’ll have to do that against someone who loves to exchange in Marlon Moraes.

Coppinger: A takedown (or 10) certainly would help Blaydes’ efforts. After all, the NCAA wrestler is a far better grappler than his opponent. If Blaydes can control Rozenstruik on the ground — and along the cage — he can neutralize his foe’s awesome power and avoid the kind of shot that flattened him in his most recent loss to Derrick Lewis.

In Blaydes’ last win, a unanimous decision over Alexander Volkov, Blaydes scored 14 takedowns while allowing just one. His losses to Lewis and Francis Ngannou both featured exactly zero takedowns.

But Blaydes’ finish of Junior Dos Santos was also a stand-up affair, so Blaydes doesn’t need have to rely on his wrestling game to win. So for this fight, at least, I’ll say, “not real.”

If Rozenstruik is going to spring the upset, he surely needs to avoid being dominated on the ground. His takedown defense has proven formidable, with Rozenstruik able to avoid 80% of attempts.

Rozenstruik, a former kickboxer, is the more dangerous striker and loves to keep the fight on his feet. In fact, he’s never recorded a takedown in his eight fights in the Octagon. All of his wins have come via KO/TKO, with his two losses coming against the two best heavyweights in the world (Ciryl Gane and Ngannou).

CNN commentator challenged on her religion and abortion stance. See her response
Listen to the daily voicemails from Giuliani that state official avoided
Record-breaking freeze halts US
Filmmaker reveals conversation with Trump days after he lost election
This is how Trump supporters reacted to seeing parts of Jan. 6 hearing