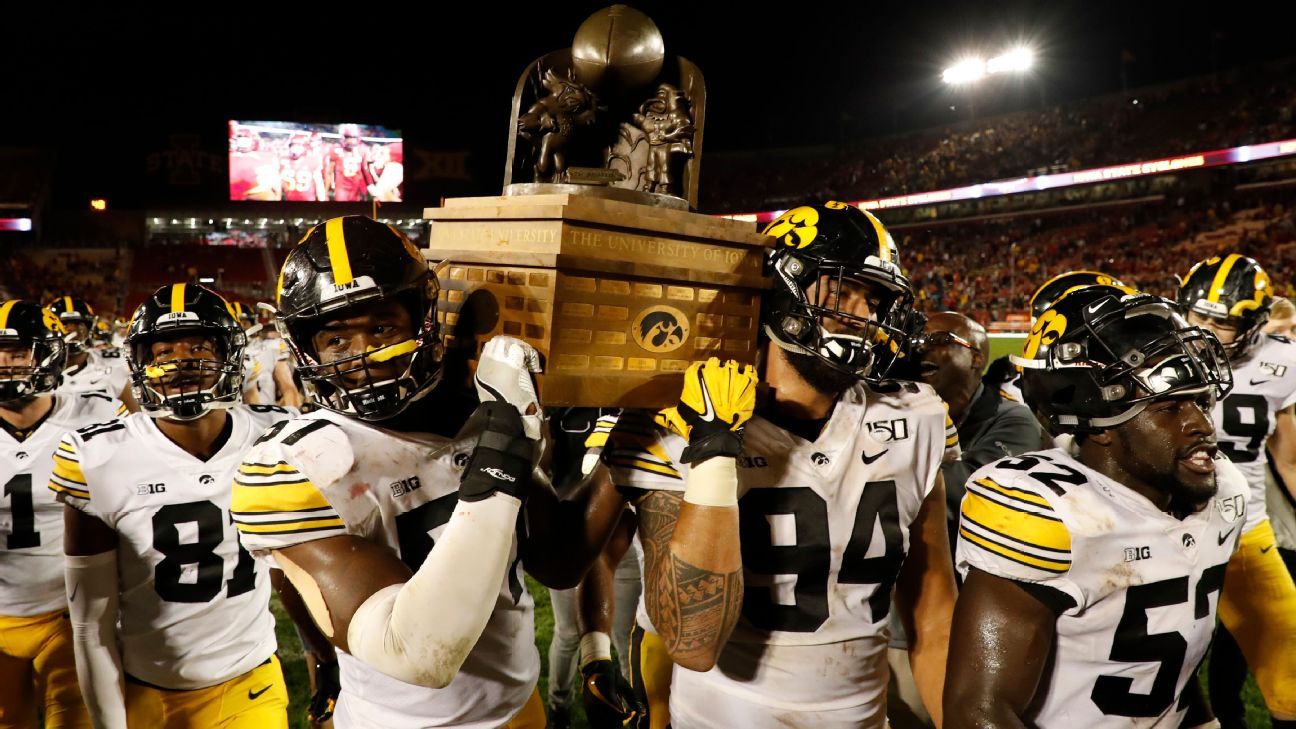 What we’ve got here is the greatest Cy-Hawk battle of all time. For the first time in the 67-game history of the series, both the Iowa Hawkeyes and Iowa State Cyclones will be ranked when the rivals meet in Ames (4:30 ET, ABC). Even better? They’re both in the top 10: The Hawkeyes jumped from No. 18 to No. 10 this week after crushing Indiana 34-6, while the Cyclones dropped two spots to No. 9 after escaping Northern Iowa 16-10.

The matchup will be the ultimate test of how far Iowa State has come under Matt Campbell. This is just the second time in history the Cyclones have been ranked in this rivalry matchup (the other time was in 1978). But for all that Campbell has done — his .556 winning percentage is the best in school history among coaches who have been there for 50 games — he has never beaten Iowa. But he has closed the gap: In Year 1 in 2016, Campbell and Iowa State suffered a 42-3 loss. Since then, the past three losses have been by a total of 14 points, including an 18-17 nailbiter in 2019. The game was not played last season.

The Cyclones will face an Iowa team that has won 12 straight nonconference games and four straight games against ranked teams. And while Iowa State’s Breece Hall is one of the nation’s most productive running backs, Iowa has allowed just 2.8 yards per carry since the start of the 2020 season, third best in the country in that span.

The stakes are high, and they got even higher with the prospect of realignment hitting the Big 12 and the Big Ten being part of the alliance with the Pac-12 and the ACC. As of now, there’s no guarantee the game will continue once everything shakes out.

So embrace this, much like the winner will embrace the Iowa Corn Cy-Hawk trophy. There’s never been a bigger game sponsored by corn.

A tribute to service

Army and Air Force will meet on Saturday on the 20th anniversary of the Sept. 11 attacks.

Navy will mark the occasion with a show of unity for military branches by wearing special Marine Corps football uniforms, inspired by the Marines’ “Dress Blue A” uniform with white gloves, black cleats, red trim and royal blue pants. “The actual ensemble worn by a Marine is the only uniform within the U.S. Military designated to include this red, white, and blue color scheme,” the Navy website says.

The helmets say “OO-RAH” on the front of them, “Semper Fi” on the back and the player nameplates and feature the Corps’ Eagle, Globe & Anchor logo on the sides.

Air Force will wear its annual “Air Power Legacy” alternate uniforms, with this year’s honoring the B-52 Stratofortress.

Johnny Majors and the Pitt Script

When Pitt and Tennessee meet on Saturday (noon ET, ESPN), they’ll honor legendary coach Johnny Majors, who coached at both schools. Former Majors assistant Jackie Sherrill, who succeeded him at Pitt, will serve as the Panthers’ honorary captain.

Majors obviously made an enormous impact on the field. But we spoke to Sherrill last year about one of Majors’ most interesting contributions to college football: the Pitt Script.

Upon arriving at Pitt in 1973, Majors wasted no time making it clear how much he cared about details. In his first team meeting, he stuffed the Panthers’ jerseys in a trash can, saying he believed proud teams played better, and this included looking good. The nondescript logoless helmets were history. The Panthers’ blue and gold looked too much like Notre Dame’s colors, too.

“In the coaching profession, Coach Majors was the best PR guy ever,” Sherrill, who was a 30-year-old defensive coordinator for Majors when they arrived, told ESPN. “He went to Carnegie Mellon classes on how to be a PR guy. Coach studied pretty hard.”

Majors hired an artist to create a Pitt logo and picked more distinctive colors. He was involved in every aspect of the design, down to the placement and thickness of stripes on the jerseys and where they’d go, unlike today where shoe companies often design uniforms based on a template.

“I went on vacation with Coach and his family back to Tennessee,” Sherrill said. “We were still designing the uniform on that trip. I remember going around to helmet companies to make sure they were able to make that color, because he wanted it implanted in the plastic, not painted.”

For six months, Sherrill frequently had to model prototypes on the field while Majors sat in the stands and pondered the combinations. He finally settled on the iconic Pitt Script, which adorned helmets as part of one of the greatest uniforms in college football history. It was the logo of the Panthers’ 1976 national championship team and was worn by Tony Dorsett and Dan Marino when they became legends. Pitt returned to it in 2015 after an ill-advised makeover in 1996.

“The Pitt Script was kind of like the Nike swoosh or the Adidas stripes, like the Texas Longhorn or the Alabama A,” Sherrill said. “It’s iconic. During that period of time, it was a symbol of one of the best football teams in the country.”

“He built a great program at Pitt.”

Former Pitt Coach Jackie Sherrill called in to Packer & Durham this morning to reminisce on the huge impact that Johnny Majors had on Pitt Football history.#H2P » @ACCNetwork pic.twitter.com/LCyiSnuJzL

What else to watch this weekend

C.J. Stroud and Ohio State vs. Oregon (noon ET, Fox)
Stroud’s debut against Minnesota was a good one; he completed 13 of his 22 passes for 294 yards and four touchdowns with one interception. But there was a noticeable pattern that Oregon might try to take advantage of.

Stroud was at his best, by a wide margin, when throwing to his left. Stroud was 7-of-9 for 204 yards with three TDs and no picks when going to his left, but if he threw the ball anywhere else, he completed just 55% of his passes for 90 yards with one touchdown and one interception.

With Kayvon Thibodeaux’s status up in the air, don’t be surprised if you see Oregon make an attempt to see if Stroud can beat the Ducks going anywhere but left.

Washington’s redemption game vs. Michigan (8 p.m. ET, ABC/ESPN App)
Washington is coming off of one of the worst losses from Week 1. After going up 7-3 through the first quarter, the Huskies allowed Montana to score 10 unanswered points in the fourth quarter to give the Grizzlies the 13-7 upset.

Huskies head coach Jimmy Lake said on Monday, “We should not have played the way we played on Saturday night and that’s why I feel so bad for our fans, for our supporters. They should be disappointed. They should be pissed, just like we are. All we can do now is move forward here and make amends. And that’s what we’re trying to do.”

There aren’t many other games that Lake could ask for as a better opportunity to make amends than a Saturday night trip to Ann Arbor against Michigan. The Wolverines aren’t the power that many expected them to be, but it would be a good win nonetheless.

It won’t be an easy task. If Washington wasn’t able to somewhat bully its way past Montana based off of talent and skill alone, the Huskies won’t be able to do it against Michigan. That’s where Lake thinks Washington can improve.

“We’ve got to be better prepared, we’ve got to have a better plan and we did not execute a good plan,” Lake said. “It all starts with coaching first, and it starts with me.”

Kennesaw State (and the turnover plank!) vs. Georgia Tech (noon ET, ESPN3)
Georgia Tech welcomes Kennesaw State to Bobby Dodd on Saturday, which would make for a fun upset if the Owls were able to pull it off for a couple of reasons.

The first is location. Kennesaw State is north of Atlanta, and considered part of the metro area. The Owls have only been playing football since 2015 as a member of the Big South Conference, but have quickly established themselves as one of the better teams in FCS.

The second and more important part of this is Kennesaw State’s turnover plank, a piece of wood with two eyes and a mouth that the team uses to celebrate turnovers. Plank is a character from Cartoon Network’s “Ed, Edd n Eddy,” with no sort of significant ties to Kennesaw specifically. Tanner Jones, who played multiple positions for the Owls, found Plank on spring break in 2015, took him home and then introduced him to the team in 2017.

Yesterday’s 🖐 turnovers tied the program record for turnovers in a game. 🙌

If the Owls were to upset the Bees, we’d probably get plenty of looks at Plank.

No. 21 Utah vs. BYU (10:15 p.m. ET on ESPN/ESPN App)
The next-biggest rivalry game in Week 2 is happening in Provo, where Utah will face BYU. It’ll be the second of three consecutive Pac-12 games on BYU’s schedule, as the Cougars are coming off a 24-16 win against Arizona.

BYU wide receiver Gunner Romney is doubtful to suit up against rival Utah, which would be a big loss for the Cougars. But brothers Samson (who previously played for Utah) and Puka Nacua are expected to play in what should be a fun matchup between rivals who can’t agree on when their first game was played or the series’ all-time record.

No. 15 Texas at Arkansas (7 p.m. ET on ESPN/ESPN App)
From a breakup in the Southwest Conference to a future remarriage in the Southeastern Conference, this is one old rivalry we’re excited to regain. The teams are meeting for the 79th time, making this the most-played rivalry in Arkansas history. But just five of those games have come since the Razorbacks left the SWC in 1992. And while the Longhorns lead the series 56-22, Arkansas is 3-2 against Texas in the nonconference games.

The trash talk has already started where it matters most, the local barbecue joints.

Can’t wait to introduce you to our friend Bijan! 🤘🏻 pic.twitter.com/byU5Hy2wUR

A bye week by any other name

Mercer at No. 1 Alabama (4 ET, SEC Network): Alabama should really pick on someone its own size, like … well, we’re not sure. Nick Saban is 10-0 vs. FCS teams at Bama, winning by an average of 44.2 PPG. A win here would be the Tide’s 99th straight over unranked opponents. Just don’t tell Nick Saban this one will be easy.

Western Carolina at No. 2 Oklahoma, 7 ET: This is available on pay-per-view for the low, low price of $54.99. If you need any help getting over the hump to mash that “buy” button, consider this: Oklahoma is 8-0 vs. FCS teams, winning by an average of 52.6 points.

South Carolina State at No. 6 Clemson (5 ET, ACC Network): A cure for the Clemson offense, which was held to just three points in a loss to Georgia last week? That would be playing the Bulldogs of Orangeburg, South Carolina. Since 2008, Clemson has played South Carolina State four times. Average score? 60-5, including a 73-3 win in 2014. Clemson is 35-0 against FCS teams.

Forgive us, Iowans. But it’s important to include an important historical footnote. This year marks the 10th anniversary of the sadly departed “pewter family” trophy that became the object of scorn after it was introduced for the rivalry in 2011.

The trophy, which depicted a father kneeling next to a bushel of corn alongside his family and a tall cornstalk, was roundly mocked and quickly abandoned. It was never awarded, and never seen again.

But it lives on lovingly. In Polk City, Iowa, this week, families could re-create the trophy on a photo stage. Now that’s entertainment.

In the Name, Image, Likeness era