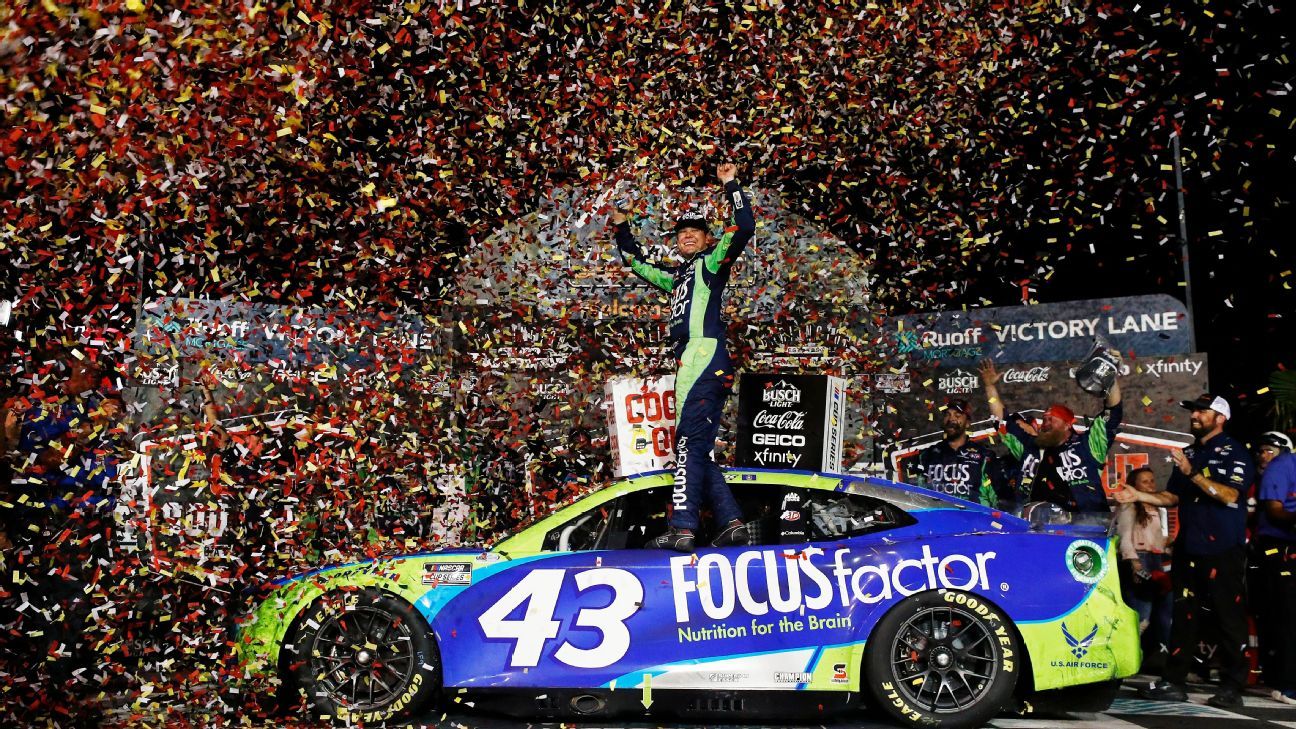 From Jones steering iconic No. 43 to victory to Harvick’s fiery Ford, the Southern 500 definitely delivered

Awesome. Welcome to the postseason.

On Sunday night in the 73rd edition of the Southern 500 at Darlington Raceway, NASCAR’s oldest speedway and its still-new race car joined forces to send the sport through a time machine and a garbage disposal all at once. When the checkered flag flew and the smoke quite literally cleared, Erik Jones drove a car into Victory Lane that hadn’t won this race in exactly 55 years, Richard Petty’s always famous but often feeble No. 43. Meanwhile, Chase Elliott, the driver who led the 2022 Cup Series standings all season, ended the night and started the NASCAR playoffs finishing dead last.

As noted NASCAR fan (probably) Maximus Decimus Meridius once asked, “Are you not entertained?!”

Honestly, Max? Yes. Yes, we were. We have been all season long. And we will take nine more weeks of it, from here until the final lap at Phoenix Raceway on Nov. 6, thank you very much.

Granted, none of us is Elliott (unless he is reading this, and if he is, hey, man, thanks), who now sits ninth in the standings while staring cautiously at the two tracks that will be raced upon before the postseason field is whittled from 16 to 12. He finished 29th at Kansas Speedway earlier this year and 25th at Bristol Motor Speedway in its last non-dirt event one year ago. None of us is Kyle Busch, who led 155 laps at Darlington, seemingly en route to getting his title run back in order … before popping an engine and finishing 30th.

– Watch Formula One and the W Series all season long on ESPN
– Don’t have ESPN? Get instant access

And none of us is Kevin Harvick, who slogged through most of the regular season, then won two in a row to seize momentum heading into the playoffs, in search of his second series title. But his night ended in South Carolina with him escaping a fire-engulfed Ford, reigniting his bemoaning of NASCAR’s new one-size-fits-all Next Gen car as being unsafe.

“What a disaster for no reason,” the 46-year old ironically known as “Happy” said on NBC Sunday night. “We didn’t touch the wall. We didn’t touch a car and here we are in the pits with a burned-up car, and we can’t finish the race during the playoffs because of crappy-ass parts.”

His irritation is understandable. Harvick is now ranked last among the 16 playoff drivers. Busch sits in 11th. The previous eight years of NASCAR’s so-called Elimination Era say that they are in real trouble of not making the bracket when it cuts four teams two weeks from now. They will have to win one of those two races to advance.

However, those are the same parts and same race car, essentially a spec machine, that have also produced a season that will rank among the most competitive in NASCAR’s nearly 75-year history, no matter what happens over the remaining nine weeks. Jones was the season’s 17th different winner, and more than a few non-playoff participants are still capable of hoisting a trophy before the year ends, led by another who had his heart broken by the Lady in Black, Martin Truex Jr.

The 2022 parity party of victors has opened doors long guarded by stock car racing’s powerhouses, welcoming teams like Petty GMS Motorsports and drivers who have found Victory Lane as difficult to reach as a Himalayan mountain peak.

No one disagrees that the Next Gen car deserves a long, hard look over the winter when it comes to incidents like Harvick’s fire. Safety should always be first.

But most are also in agreement that the equality-generating raciness of the machines doesn’t need to change at all. The ones who remain resistant seem to be those who used to have the winners’ lounge to themselves, superteams that now share that room with guys like this year’s five first-time Cup Series race winners, and would-be second-tier outfits such as Petty GMS, Team 23XI and even the once-mighty Richard Childress Racing. Those who have had that club to themselves aren’t super big fans of level playing fields.

Why would they be? So many future NASCAR Hall of Famers, those who used to be able to elbow out the kids from the bar, are now having to stand in line for the next drink like everyone else, waiting for service from a bartender who looks like an awful lot like Father Time. It happens. It just doesn’t usually happen all at once like it has this season.

But keep in mind that it wasn’t so long ago that the loudest complaints weren’t from the drivers; they came from the fans. When NASCAR’s TV ratings were in the tank and there was nary a highlight to be found or a conversation to be heard on any sports talk show. Like, less than five years ago. The grousers said it was all too predictable. They hated that the same guys won all the time. They howled that one guy (see: Johnson, Jimmie) won all the championships. They said the schedule was full of racetracks that all looked the same, and so did the cars, separated visually by nothing more than a different set of stickers on the nose.

Now NASCAR has 17 winners. It has a schedule packed with road courses. No one has been able to repeat as Cup champ since Johnson’s run of five straight ended … in 2010!

What we have now, Next Gen car and otherwise, might not be perfect, but it’s certainly not boring. No one can accuse the sport of being predictable. Not the sport we’ve watched this season, particularly over the past few weeks, and especially what we witnessed Sunday night at Darlington. Heck, we don’t even know what the schedule is going to look like year to year, after decades of being able to set your watches to the same types of tracks at the same places on the same dates.

Oh, and a heads-up, it’s only about to get wackier. Take a glance at the racetracks that are slated for the cutoff races at the end of each round of these playoffs.

That’s probably not going to be a lot of fun for the racers. They will wreck cars and lose sleep and favorites will fall out of contention and surprises will win more races. They will all stress out because of all the above. They will complain loudly about it all on TV. But the next weekend, another green flag will be waved, and they will do it all over again.

Will we be entertained? Based on the Southern 500, you can bet your maximus we will.

Jones holds off Hamlin to win at Darlington