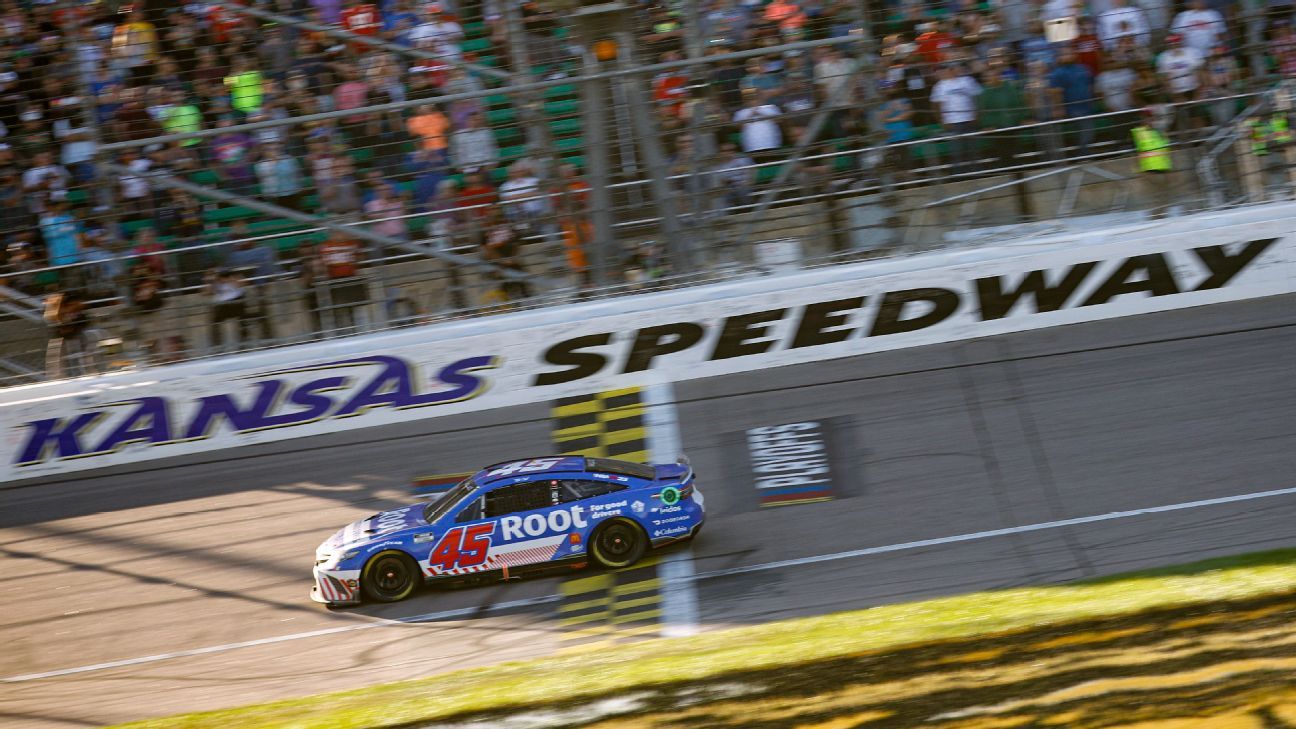 Wallace holds off Hamlin for 2nd win on MJ team

KANSAS CITY, Kan. — Bubba Wallace won his second career NASCAR Cup Series race Sunday and denied the playoff field an automatic spot in the next round for the second straight week when he held off championship contenders Denny Hamlin and Christopher Bell to prevail at Kansas Speedway.

Wallace, who is not among the 16 in the title hunt, got around Alex Bowman for the lead with 67 laps to go and then built a two-second lead over a parade of playoff drivers trying to earn a win and ensure their spot in the next round.

Hamlin was at the front of it. The co-owner with Michael Jordan of Wallace’s car at 23XI Racing managed to whittle about a tenth of a second off the No. 45’s lead over the closing laps. Hamlin ultimately ran out of time, and Wallace took the checkered flag in the same car that Kurt Busch won with at Kansas earlier this year.

“I knew Denny was going to be strong,” said Wallace, who stepped into the car while Busch deals with the effects of a concussion. “It’s cool to beat the boss, but it’s just cool to be lights out today and come away with the win.”

Bell clinched a spot in the next round of the playoffs on points. The other 11 spots are up for grabs heading to Bristol.

Wallace also won during last year’s playoffs at Talladega when he was likewise out of the title picture. And his win came after Erik Jones, who likewise missed out on the postseason, won a week ago at Darlington.

Wallace is the 18th driver to win this season.

“I was driving as hard as I could,” said Hamlin. “Nothing will ever come free when you’re driving for me. If you think I’m going to let you win, you better find another team.”

The trouble began when Harvick was caught four wide shortly after a Lap 25 competition caution. Chastain drifted in front of him, took the air off Harvick’s nose and instantly made him loose. The three-time Kansas winner touched the wall out of Turn 4 and then hit hard again across the start-finish line, leaving him with heavy damage to the right side.

It’s the first time in a Cup career spanning 782 races that Harvick has failed to finish three straight races.

“It is what it is,” Harvick said. “We were racing to win anyway today, so that’s what we will do again next week.”

Tyler Reddick‘s brilliant weekend, which included his first pole on an oval, likewise ended in the first stage when his right rear tire went down. That sent his No. 8 sliding into the wall, breaking the upper control arm in the right front.

“We leave here with not a lot of points,” Reddick said, “so we’re going to fight hard at Bristol.”

Stage 2 was just as frustrating to playoff hopefuls. Many had problems on pit road, including Kyle Busch, who not only had a penalty for an uncontrolled tire but later spun into the grass and went a lap down. He finished 26th and dropped below the playoff cutline along with Harvick, Chase Briscoe and Austin Dillon.

Busch trails Reddick and Austin Cindric by two points heading to Bristol. Dillon is another point back.

JTG Daugherty Racing learned that longtime team member JR Hollar died early Sunday. He was 57. The cause was not disclosed. … Ricky Stenhouse Jr. also had a right rear tire go down while running near the front, then Harrison Burton and Corey LaJoie wrecked on the restart.

The final race in the round is Saturday night on the concrete at Bristol, where Kyle Busch won the Cup race on dirt in April.