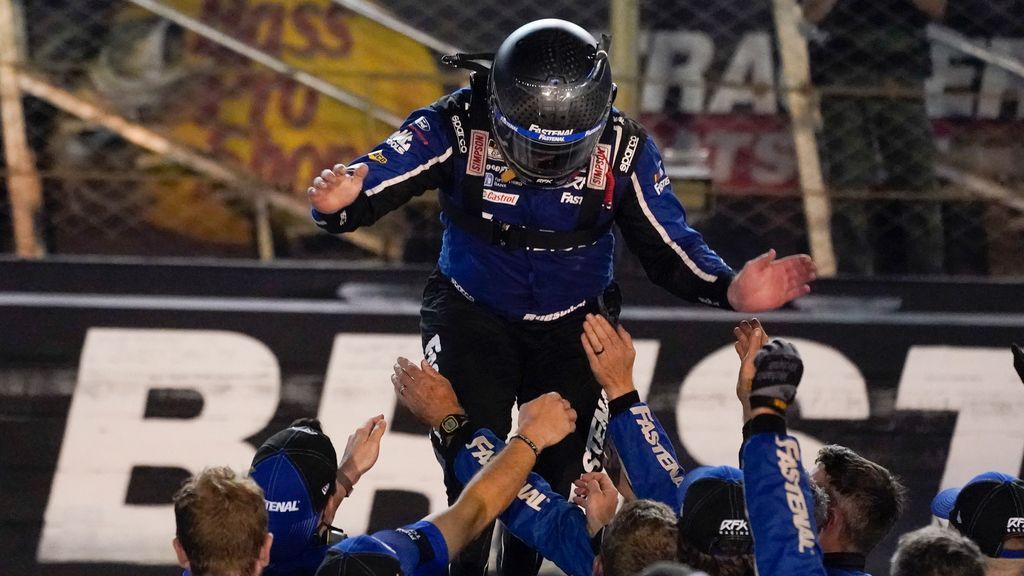 BRISTOL, Tenn. — Chris Buescher closed out a bizarre first round of NASCAR’s playoffs in which none of the title contenders won a race by becoming the 19th winner this season with his victory Saturday night at Bristol Motor Speedway.

The second win of Buescher’s career marked the first time in this format of NASCAR’s postseason that a playoff driver failed to win a race during a round. Erik Jones won the opener and Bubba Wallace won last week.

Buescher won for RFK Racing, the longtime Jack Roush-owned team that took on Brad Keselowski in the ownership group this season, to give the organization its first win in a points-paying Cup race in over five years. Buescher and Keselowski both won a pair of exhibition races for RFK at Daytona in February.

“This is so special, this team does such a good job,” said Buescher, who won with a late call for two tires on the final pit stop. “It’s special to get RFK into victory lane for the first time.”

The showdown on the Bristol short track was the first elimination race of NASCAR’s playoffs and it was a nail-biter to the very end as at least a dozen of the title contenders had some sort of problem. There was a rash of flat tires for Ford drivers, mechanical problems for Toyota, an engine failure for Kyle Busch and Richard Childress Racing’s two drivers were both involved in a crash.

The 16-driver field was cut by four, and eliminated from the playoffs were Kevin Harvick, Busch and RCR teammates Austin Dillon and Tyler Reddick.

Harvick, Busch and Dillon were all below the cutline headed into the race, but Harvick had a shot at the win until a wheel fell off his Ford during the final pit stop. He’d inherited a near-clear path to the victory — and an automatic berth into the next round — when Keselowski got a flat tire and hit the wall while leading.

“Just went from having a chance to lead the parade to being a part of the parade,” said Harvick, who noted he was ahead of Buescher at the final pit stop.

Austin Cindric barely advanced because he was one of the early Ford drivers to run into trouble with a flat tire. There was a rash of tire problems for Ford drivers, and it would have eliminated many of them if so many playoff drivers didn’t have problems.

Among those who had no problems were Hendrick Motorsports teammates Chase Elliott and William Byron, who finished second and third in Chevrolets. Christopher Bell finished fourth in a Toyota for Joe Gibbs Racing and was followed by Kyle Larson and Ross Chastain of Trackhouse Racing.

The 19 winners in a season has been done a record four other times in NASCAR history and Elliott, who cycled back to the points lead for the start of the second round of the playoffs, noted the first three races showed what a crapshoot the process is this year.

“I don’t think anybody is safe,” Elliott said. “Nobody is safe in these rounds. And we want to do better, too.”

Kyle Busch won’t race for a third championship in his final season with Joe Gibbs Racing.

Busch closed a wild week in which he announced he was leaving JGR to drive for Richard Childress Racing, then went to Bristol desperately trying to stay in title contention. But his engine seemed to fail just past the halfway mark and Busch bounced off the wall, then drove his Toyota to the garage and walked back to his truck. He never removed his helmet.

“I don’t even know what to say. I’m flabbergasted,” Busch said. “I just feel so bad for my guys. They don’t deserve to be in this spot, we’re too good of a group to be this low down on the bottom and fighting for our lives just to make it through. But two engine failures in three weeks, that will do it to you.

“This is not our normal.”

It seemed certain Busch had been eliminated from the playoffs until the next restart and Daniel Suarez triggered a crash that also caused damage to contenders Dillon and Reddick. Like Busch, Dillon went to Bristol below the cutline and in danger of elimination.

The crash gave new hope to Busch, but he said he wasn’t sticking around to find out if he advanced. He said once released of his NASCAR obligations, he was headed back to North Carolina.

The opening race of the second round of the playoffs is Sunday at Texas Motor Speedway. Blaney won the All-Star race there in May, and Larson won the playoff race there last season when Texas opened the third round and Larson’s victory earned him an automatic berth in the championship finale.