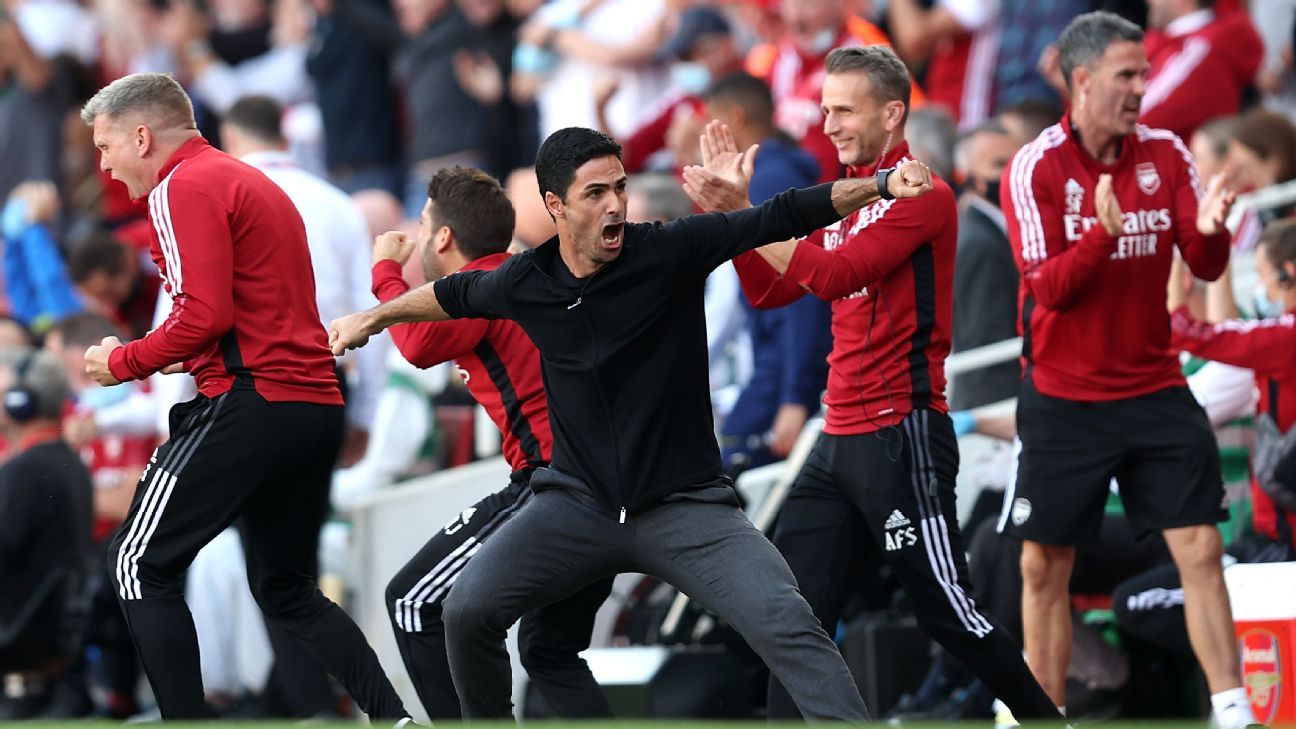 Rewind to Aug. 28, when Manchester City inflicted a humiliating 5-0 defeat on Arsenal, their third Premier League loss in a row following miserable outings against Brentford and Chelsea. It was the first time in 67 years the Gunners had lost their opening three games in a campaign and the continued presence of manager Mikel Arteta on the sidelines was dividing the fanbase.

The Gunners were bottom of the table after an inauspicious start — hampered also by the COVID-19 pandemic, which led to the cancellation of their preseason tour as well as the absence of a number of star players due to positive tests — in which they conceded nine goals and scored none.

Yet Arteta was backed by his bosses and urged the fans, with a phrase borrowed from NBA team Philadelphia 76ers, to “trust the process.” It was a rallying cry asking them to believe in the work he is doing alongside the Gunners’ hierarchy. After spending around £150m in the summer on reinforcements — more than any other Premier League team, with defenders Ben White (£50m), Takehiro Tomiyasu (£16m) and Nuno Tavares (£8m), goalkeeper Aaron Ramsdale (£25m), midfielders Martin Odegaard (£35m) and Albert Sambi Lokonga (£15m) arriving at the Emirates — the north London club still wasn’t exactly where it wanted to be, but the former club captain knew better things were coming.

Fast forward three months and Arsenal sit fifth in the table, enjoying the league’s longest unbeaten run — eight games, including six wins — with a clear sense of direction. The fans are back on board and Arteta is happy.

In their last Premier League outing against Watford on Nov. 7, Arteta celebrated his 100th game as Arsenal manager and his numbers are surprisingly impressive: 54 wins, 20 draws, 26 losses. If you consider games won after a penalty shootout (which is officially a draw for stats), Arteta is actually on 56 victories.

That is only two fewer than George Graham (1986-1995), but three more than the legendary Arsene Wenger at the same stage of their coaching careers at Arsenal. Arteta’s win rate is 54%, compared to Wenger’s 51%, while he also holds a lower loss ratio (18% vs. 26%) after a century of appearances in the Gunners’ dugout.

The other key areas of comparison with Wenger’s early days appear very similar, too. Arteta has 163 goals for, 97 against and 38 clean sheets in an arguably more competitive Premier League for his first 100 games. When Wenger arrived in 1996, his team boasted 157 goals for, 84 against and 42 clean sheets over the same span.

In stark contrast, however, Arteta’s first 100 games have been a rollercoaster, with highs and lows almost every week. Winning an FA Cup and a Community Shield in his first six months as a manager was great, but it perhaps raised expectations of further short-term success while he was still learning. He’s still learning, of course, and still grappling with an imbalanced and aging Arsenal squad, lacking in certain positions and unable to find consistency. But now there is more hope for the future.

What Arteta has tried to do

It seemed logical at the start of his tenure that Arteta wanted to emulate Manchester City manager Pep Guardiola, having joined his backroom staff as assistant from 2016-19. Arteta wanted his side to mirror City, though while the principles of play he wanted to implement were similar, the delivery was far from City’s standard.

At times, what he was asking of his players was too complex for an inherited squad not of his own making, so he worked on a simplified structure that better suited the players at his disposal. Having tried a variety of formations, there were still similarities with Guardiola, especially in how he used “asymmetrical” wide players (right-footed players on the left, and vice versa), but this season has seen Arsenal develop their own identity.

Looking at their 3-1 win against Aston Villa on Oct. 22, Arsenal set up in a 4-4-2 formation for the first time under Arteta, with Alexandre Lacazette just behind Pierre-Emerick Aubameyang and Emile Smith Rowe and Bukayo Saka filling the wide positions. Lacazette’s purpose was to play between the lines and link up the play, but more importantly, he was asked to block Villa’s holding midfielder, Douglas Luiz, who was responsible for starting all their attacks. The plan worked perfectly and the Gunners outplayed and outsmarted Villa.

It naturally took Arteta some time to settle, but it seems his team are now comfortable in possession, efficient in quick attacking transitions, can set their defence in a low block or a high press, and look more confident in beating the opposition press. Thanks to the work of coach Nicolas Jover, they are also one of the best teams in the league when it comes to set pieces.

Which players have shone?

To find an identity, the 39-year-old had to rebuild the squad. From the 40 players who have featured under him in the Premier League so far at Arsenal, 14 have left. Last summer, all six summer signings were aged 23 or under, which led Arsenal to have the youngest starting XI in the league this season with an average of 24 years and 242 days. His back five (Ramsdale, Tomiyasu, White, Gabriel, Kieran Tierney) only started to play together on Matchday Four, which was the start of this superb run.

Gabriele Marcotti and Julien Laurens dive into the latest news and gossip, analyze matches with special guests, and give their unique perspective on the world of football.

The impact and leadership of goalkeeper Ramsdale, the centre-back partnership of White and Gabriel, the attacking talent of Tierney down the left and solidity of Tomiyasu at right-back has made the Arsenal defence really strong. If anything, it’s the strongest and most disciplined it has even been in Arteta’s 100 games in charge.

On top of that, the manager has been a key part in the emergence of Smith Rowe and Saka, the two prodigies from the Arsenal Academy in Hale End.

Saka has been Arsenal’s best player since Arteta’s arrival and the player the most used by the Spaniard, featuring in 82 games. While, given Smith Rowe went on a six-month loan to Huddersfield in January 2020, the impact of the 21-year-old has been exceptional and rarely seen in the Premier League at his age. Arsenal have a 58% win percentage with him as a starter, compared to 33% without. Every time Smith Rowe scores — he’s found the net in 12 different games since making his Premier League debut — Arsenal have won.

The turning point in Arteta’s 100 games in charge is without a doubt the game against Chelsea on Dec. 26, 2020. Arsenal were 15th in the table at the time, and winless in their last seven. With little reason to be cautious, Arteta started Smith Rowe, Saka and Gabriel Martinelli (all 20 years old or younger) at the time, in attack and the Gunners played with intensity, an aggressive high press and plenty of movement.

Their 3-1 win that day proved to be a seminal moment. Since then, Arsenal have won 67 points in the Premier League. Only Manchester City (86) and Chelsea (68), with new manager Thomas Tuchel for most of it, have more over the same period of time.

There are more challenges ahead for Arteta, starting with a tough trip to Liverpool on Saturday — they’ve played three times in the league under the Spaniard, winning once and losing twice — but the aim now is to keep building on the last three months.

Beyond that, Arteta’s goal is for his next 100 games in charge to be more successful than the first.